The Residents: The Eyes Have It (Part One)

Surveying the landscape of 20th and 21st century music, one is unlikely to encounter anything stranger than the body of work credited to The Residents. The intentionally anonymous collective has been charting its own path – in music, video and the space in which those two creative disciplines overlap – since the late 1960s. Little is known about The Residents; they have steadfastly refused to reveal their identities, and even their working methods remain inscrutable. But the mysterious aggregation has created a staggering catalog, one that includes more than 60 albums of compelling, clever and often confounding avant-garde music.

The group’s activities date back to 1968, but The Residents’ official timeline pegs 1972 – when they adopted their name – as the true beginning. That makes 2022 the 50 year anniversary of the group jokingly self-billed as “North Louisiana’s Phenomenal Pop Combo.” It’s a perfect time to look back at the group’s history. 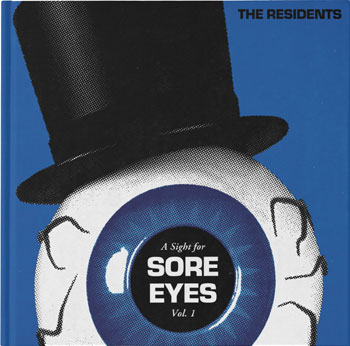 And now in 2022, the San Francisco-based collective has cooperated with author/archivist Aaron Tanner in the creation of a massive hardcover book, A Sight for Sore Eyes, Vol. 1. Chronicling in words and images The Residents’ saga from its earliest days through 1983, the book is equal parts fascinating and illuminating. It won’t answer perennial questions regarding The Residents’ identities, but for those who dare to enter the bizarre world of the four (or however-many) myserious creatives, it’s an essential piece of the puzzle.

Over the years, a few bits of solid information about The Residents have found their way into the pubic sphere. While the identity of its members has always remained officially secret, it’s widely acknowledged that The Residents originally included Hardy Fox and Homer Flynn among their number. Even 15-plus years ago when the group released its uncharacteristically tuneful and accessible album The River of Crime, Fox was the acknowledged spokesman for the group. He would speak on behalf of the group as a representative of The Cryptic Corporation, The Residents’ business arm. And in live performances, Fox is likely to have been one of the figures behind the masks.

Fox passed away in 2018, by which time he had officially left the orbit of The Residents. Homer Flynn, who had long been recognized as the graphic designer responsive for much of The Residents’ visuals, took on the role of head of The Cryptic Corporation. And these days it’s he who accepts requests for interviews. No masks are involved, and Flynn appears onscreen via Zoom conferencing (albeit with characteristically odd and unsettling digital images replacing the actual room in which he sits during those chats). Some things have changed, while others remain constant: whomever is speaking on behalf of The Residents invariably refers to the group in the third person plural (“them”).

Across more than 350 pages, The Residents’ story is charted in A Sight for Sore Eyes, making extensive use of images – photos, posters, collages and other memorabilia – from the collective’s official archives. Flynn explains how The Residents came to work with Tanner, who is editor in chief and creative director at Melodic Virtue, the book’s publisher. “He’s somebody who had run across The Residents and [thought], ‘Hey they’ve got loyal fans; I can put a book together, and it’ll sell,’” Flynn says. “But obviously,” he quickly adds, “he’s more committed than that.” 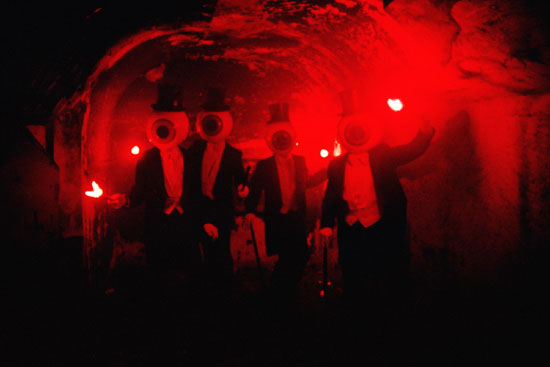 “I’ve been creating coffee table books of bands – largely from the ‘80s – for the last few years,” Tanner explains. “And when the opportunity came up to do one with the most artful group in modern history, needless to say, I jumped at the chance.” Tanner believes that there has never been a group to rival The Residents in terms of their visuals carrying as much weight as their music. “They had a massive impact on the way I approach my design work,” he says.

Tanner, who lives in Indiana, first came out to the Bay Area to meet Flynn just over a year ago. “He and his son stayed with me for about a week to ten days, and I pretty much gave them free access to The Residents’ archives,” Flynn says. “And he gleefully pawed through it.” The Tanners brought along a scanner and used it to capture super-high resolution digital images of the archival material.

Flynn is quick to admit that his work over the last half century hasn’t been focused primarily on building and maintaining a Residents archive. “I don’t necessarily have everything,” he says. “I have a good amount of memorabilia, but I mainly focus on ‘the parts that were used to make other parts.’” So Flynn put Tanner in touch with what he describes as “a handful of super collectors who had a lot more of the obscure stuff.”