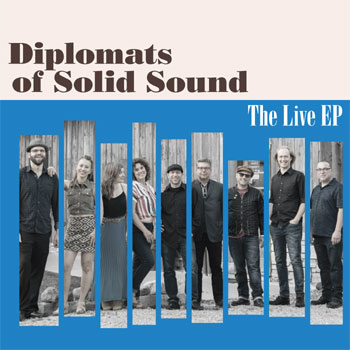 This nine-person ensemble released a fine album, A Higher Place, in 2019. That was my first exposure to the Iowa group, but I soon discovered that they have been together more than two decades. So any suggestion that they’re following on or bandwagon jumping is egregiously wrong. The group’s latest release is a five-song collection, The Live EP.

The songs are drawn from the group’s three most recent long-player. Here they’re delivered live in the studio, with no overdubs, edits or post-production fiddling of any kind. That’s admirable, of course, and very much in line with the aesthetic of an old-school soul outfit. It’s worth noting, perhaps, that their “conventional” studio albums sound organic as well, so whatever sweetening or polishing those earlier tracks went through, it didn’t take away from the real and authentic vibe of the music.

The Live EP completely avoids things like reverb; the dry, no-frills vibe presents the songs just as you might hear them should you had been lucky enough to gain access to the recording studio during their visit. The familiar melodic lines are delivered with skill and taste. The group exercises restraint on four of the cuts, only to tear the roof off the sucka with the closing number, “Jealous.”

The group’s three-vocalist setup is effectively employed, with occasional solo turns. But for the most part, the singers – Sarah Cram, Katharine Rustow and Abbie Sawyer – function as a unit. Ably supported by “the gents” on guitar, bass, drums, keys, tenor and bari sax – they showcase the Diplomats’ range and strength.

When it’s all said and done, The Live EP doesn’t really add much to listeners’ understanding of (or appreciation for) this group, as these “live” versions aren’t remarkably different than their “studio” versions. But the Diplomats’ commitment to their chosen style and their demonstrated ability to create compelling work makes any new release from them – even one covering well-trodden ground – very much welcome.