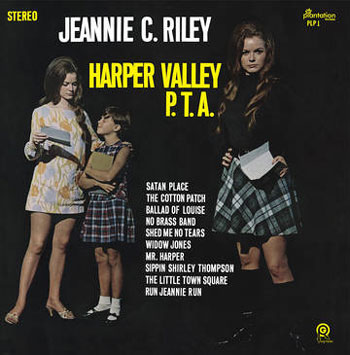 I’ve gone on about this idea before, but it never ceases to fascinate me, so I’ll mention it again. Those of us of a certain age — boomers, I guess you’d say – came of age in an era that was characterized in part at least by shared experience. Where popular culture was concerned, pretty much everybody knew who The Beatles, Led Zeppelin, The Carpenters, Jim Croce, Isaac Hayes, The Commodores, Ray Stevens and Charlie Rich were. Or at the very least, we were all familiar with their music. We may or may not have liked it all — almost for sure we appreciated each of those artists to difference degrees – but we knew about them. We experienced that music together, and it defined our generation.

I mention this because even though I am not any kind of serious fan of country music of the ‘60s and ‘70s, I certainly have more than a passing familiarity with Jeannie C. Riley’s “Harper Valley P.T.A.” The story-song was inescapable in the summer of ‘68; it got played on Top 40 stations right along with The Beatles’ “Hey Jude.” And it topped the U.S. singles charts in pop and country, making it all the way to #4 on the easy listening chart (if you’re a boomer, you’ll remember that genre).

Riley had a clear, sharp voice with just the right bits of twang and – dare I sat it – bitchiness on that song. And the Tom T. Hall lyrics ran down a litany of sins committed by others, making the song a sort of miniature c&w version of Peyton Place (okay, enough already with the period cultural references, right?). Hall’s lyric also delivers a punch for the first-time listener when Riley’s character reveals herself to be Mrs. Johnson’s daughter. (If you don’t follow, listen once and you’ll get it. Pretty clever, really.)

Albums weren’t quite yet the coin of the realm in pop, easy listening or country the way that had become so in rock, so it’s a fair bet that most listeners who dug the tune enough to purchase it would have picked up the 45 rpm single, not the long player that bore the same name. If they did buy the LP, they’d be treated to more songs in a similar vein, making Harper Valley P.T.A. something of a concept album. Or so one might retrospectively argue.

Penned by Hall, other songs on the LP expanded on the song’s characters: “Widow Jones,” “Mr. Harper” and “Sippin’ Shirley Johnson” each get their few moments in the story-song spotlight. For reasons we may never know, neither Bobby Taylor nor Mr. Baker merited a song. And contributions from other Nashville songsmiths mined similar territory; the best example is the pointedly-titled “Satan Place,” for anybody who missed the pop culture name-checking.

The tunes all sound as if they were cut in the same session with the same set of Nashville cats lending their one-take expertise to sessions produced by Shelby Singleton. The production is simple, sparkling and in service to the songs, with Riley’s voice way out in front. Lots of banjo throughout, and those c&w strings crop up inevitably here and there on tunes like “Run Jeannie Run” and “Shed Me No Tears.” And the Harper Valley character songs sound as if the band paused between numbers just long enough to grab a puff on their cigarettes before playing pretty much the same tune again, this time with Riley singing a different (but closely related) set of lyrics.

The song “Harper Valley P.T.A.” took on a life of its own, eventually spawning a (third-rate) motion picture and a (fourth-rate) television series, but neither had any involvement by Riley. But she had a good run: debuting in 1968 and scoring with her first single, she went on to land singles on the charts every consecutive year through 1974, with another in ‘76. Subsequent attempts to belatedly milk the Harper Valley gravy train (forgive that mixed metaphor) were less successful: neither “From Harper Valley to the Mountaintop” nor “Return to Harper Valley” – both released more than a decade after the original – saw any chart action.

Bizarrely for such a smash, the Harper Valley P.T.A. album went out of print by the early ‘70s, but not before an 8-track reissue in 1973. And out of print it would remain until the CD era (1996, specifically). This long awaited (well… ) vinyl reissue from ORG Music marks the first time Riley’s album has been available in the format since its original 1968 release. This limited RSD release features yellow vinyl and a new set of liner notes by Jeannie C. Riley herself.