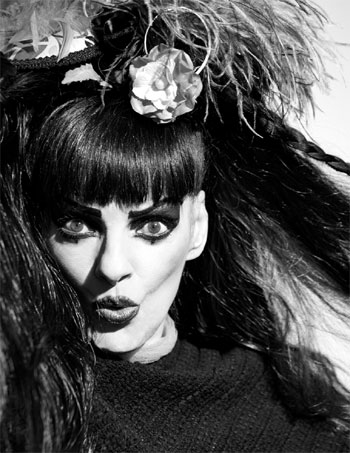 A vintage shot of Nina Hagen

Nina Hagen has always cut an unusual figure in pop music. From Berlin in what was then East Germany, she escaped to the West and launched a career as a singer. Nominally working in punk and new wave, her accomplished and powerful operatic vocals transcended those styles. And her music drew from a dazzling array of sources, including reggae, Brecht/Weill and traditional German folk. A critical and commercial success (especially in Germany and Austria), she served as an inspiration to a generation of punk and new wave artists.

Hagen’s first new release in more than a decade is “Shadrack,” a single with lyrics based on the tale from the Bible’s Third Book of Daniel. With a deep groove and prominent analog synthesizers, it’s a worthy successor to her acclaimed ‘70s and ‘80s output. Hagen shares her favorite albums.

Phoebe Snow – Phoebe Snow (1975)
My very first Phoebe Snow vinyl treasure was her debut album, smuggled over from the West into the East by dear friends of mine in 1975. It [played] 24/7 at my home in East Berlin! This album came as a surprise; it fell from Heaven, so to speak. It opened up new horizons of healing and soul-stretching for me during my departing times from the East to the West. This and all the other Phoebe Snow albums were (and still are) a super treasure for my heart and soul.

Mahalia Jackson – The World’s Greatest Gospel Singer (1954)
During my childhood, my mom had Mahalia Jackson in her record collection. I was a lucky child when I discovered her singing the Gospel. She said, “I sing God’s music because it makes me feel free; it gives me hope. When you sing the blues, you still have the blues.” Mahalia has taught me to “live the life I sing about in my song.” Thanks and praises for my dearly beloved teacher, preacher and sister Mahalia Jackson.

The Beatles – Yellow Submarine (1969)
Words can’t express all the amazing inputs and feelings, that I’ve received from The Beatles during that groovy time in my life, starting around 1968-69.

David Bowie – Golden Years (1983 compilation)
The title song brought so much joy to me. I have sung “Golden Years” and other David Bowie songs live with love many, many times. I am also forever grateful for David praying the Lord’s Prayer for his soul brother Freddy Mercury and all those beloved ones who have gone home for good, before us.

Dubblestandart / Lee “Scratch” Perry & Ari Up – Return from Planet Dub (2009)
[This record] means feeling and being at home for me. It means resurrection and reunion; it means multi-dimensional overdubbings. It means heart and soul connection through time and space with amazing grace. It mean ongoing rehearsal time for me, for an upcoming tour in the forever homeland of the souls, with my brother Lee Scratch Perry and my sister Ari Up and all her friends, with God being our best friend, where love and music never end!

Sister Rosetta Tharpe – Up Above My Head (2018 compilation)
I love to listen to her so much; she brings Eternity right down to Earth for me!

Larry Norman – Stranded in Babylon (1991)
I love Larry Norman and his songs so much that I started to translate them into German and then recorded them on my last album, Volksbeat.

Glenn Kaiser / Darrell Mansfield – Trimmed and Burnin’ & Slow Burn (2002 compilation)
I am a hard rocker too; who knew? I just love Mansfield and Kaiser; I love them ecstatically!

Hedy West – Whores, Hell and Biscuits (1976)
I had the great honor of meeting Hedy West in the mid-sixties at my stepdad Wolf Biermann’s home in East Berlin. For one unforgettable afternoon, Hedy took the time and taught me her special banjo and guitar picking style. She would sing and play her sweetest songs, and she sang Wolf Biermann’s [anti-war folk poem] “Ballad of William L. Moore” … in German!

Wolf Biermann – Aah-Ja! (1974)
Wolf Biermann was not only a stepdad for me; he also was my first teacher in songwriting and guitar playing. He taught me that as an aspiring recording artist, I would need sincerity. And then rest shall follow.