Album Review: Amanda Anne Platt and the Honeycutters — The Devil and the Deep Blue Sea 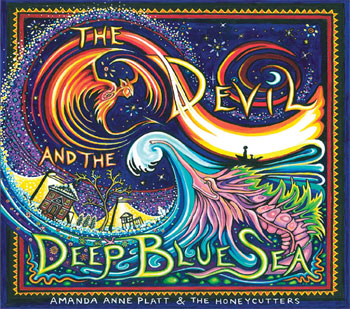 By now, gentle reader, you’re likely tiring of reading stories of the making of new albums that spend a lot of time focusing on just how much the pandemic affected things. Musicians were sidelined from a significant part of their livelihood (i.e. playing live), they were forced into isolation… yada yada. So were all of us. We get it, thanks.

So I won’t throw another log onto that metaphorical fire; I won’t devote an inordinate amount of pixels to explaining how Amanda Anne Platt and the Honeycutters weathered the pandemic and made an album during the down-time. What I will do is point out that Platt made the interesting (and ultimately gutsy) decision to slow-roll the album’s release, debuting tracks one at a time over the course of several months. Against the backdrop of already drastically scaled-back coverage of music and arts on a local basis, the lack of an album (as it were) made getting press about the album more, not less of a challenge.

But Platt has always done things on her own terms, and when one is possessed of creativity on her level, one has earned the right to hold fast to their vision. Adding to all that is the fact that – uncommonly for country, alt-country, Americana and/or what-have-you, The Devil and the Deep Blue Sea is that rarest of creatures: a concept album.

And a double-album at that. With her crystalline and deeply expressive voice Platt is that consummate artist who does it so right that listeners (like this one) predisposed to dislike twang fall under her spell and find the music to be true, right, heartfelt and real.

The first disc in the set (The Devil) is the more upbeat of the two. Opening with “New York,” it’s a collection of wonderfully arranged classic country tunes. Platt clearly places a high value on melody and accessibility, and her songs don’t waste time: they draw the listener into her world right from the opening strains.

The shit-kickin’, boot-scootin’ character of some of Platt’s back catalog isn’t a focus here; even the upbeat tracks like “The Devil” have a more serious feel, one that does seem appropriate to a set of songs made during the two-year you-know-what. The highest energy cut, “Girls Like You” has a character that feels like a feminine rethink of Old 97s, one of remarkably few acts who’ve figured out to combine country and rock in a way that honors both styles.

The second disc opens (heh) with “Open Up Your Door,” a weepy understated ballad with achingly beautiful instrumentation supporting Platt’s heart-rending vocal. While everyone involved in the making of this album displays taste of the highest order, pedal steel player Matt Smith deserves special praise; his instrumental work is deeply emotion-laden, and provides just the right tone coloring alongside the rhythm section and deftly-applied keyboard and violin textures.

That second disc (The Deep Blue Sea) does indeed have a blue character; the songs are all intimate vignettes, each fully formed yet in service to the overall vibe of melancholy and introspection. But rarely has crying in one’s metaphorical beer been such a rewarding experience.

Heck, even an authority as great as George Martin observed that The Beatles overreached on their White Album, arguing that they could have removed the weaker material and crafted a perfect single-disc. But I defy anyone to spot a speck of filler on The Devil and the Deep Blue Sea.