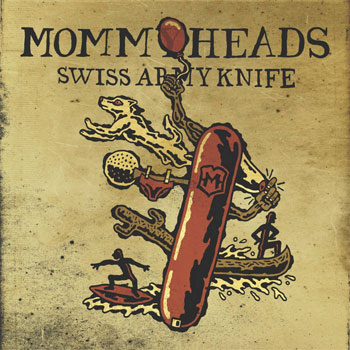 The Mommyheads released their debut album Acorn in 1989. A wholebuncha albums followed; the prolific Brooklyn-based group would release four more albums before going inactive in the late ‘90s. When they returned around 2008, their reissues and new albums created a large catalog. These days the band seems to alternate between new and archival reissues, and all of it’s worth hearing.

One of the band’s earliest releases was a cassette-only set in 1992 called Swiss Army Knife. Issued in extremely limited quantity – 100 hand-copied But even then – some 30 years ago – it was a vintage recording. Recorded in the mid 1980s, Swiss Army Knife collects the earliest known Mommyheads recordings. The band issued a “disclaimer” with review copies in which they emphasize that the recordings contain “oodles and oodles of analog tape hiss and wow & flutter.”

Swiss Army Knife includes 21 tracks, three of which are live recordings of the band onstage at legendary New York City venue CBGBs in 1988; none of the band members had yet reached his 19th birthday at that point.

The aptly-named “Freak Out Jam” is a herky-jerky affair that suggests these kids may have been ingesting some Residents, DEVO and similarly offbeat material. But then there are songs like “Lemon Meringue People.” That song has an appealing if slightly off-kilter melody supporting delightfully oddball lyrics. Bratty humor surfaces in the song titles: you’d expect “Undress Me With Your Golf Ball” and “Stop Squeezing Nipples” to be a little weird, and indeed they are. As it title might suggest, “Cactus Farm” bears the influence of Camper van Beethoven (at least to these ears, it does).

“High energy” isn’t a descriptor that applies to most of these studio tracks; that’s not what they’re about. Instead, they’re the product of clever and talented youngsters who are still in the process of developing their collective musical personality. The live tracks, however, have a seething undercurrent that showcases a band with one metaphorical foot in a kind of nervy punk energy, the other in an experimental, art-rock mindset.

There’s certainly a youthful character to the songs, but even as teenagers The Mommyheads demonstrated a remarkably sophisticated approach. The songs are deeply layered; they’re not “strumming acoustic guitars and simple vocal” type tunes. The production values – such as they are – place the songs in an appealing context. No one would mistake the tunes on Swiss Army Knife for professional studio recordings, but the music is strong enough that the collection is enjoyable on its own merits, not simply as a curio of interest to those already won over by the Mommyheads’ collectively idiosyncratic style.