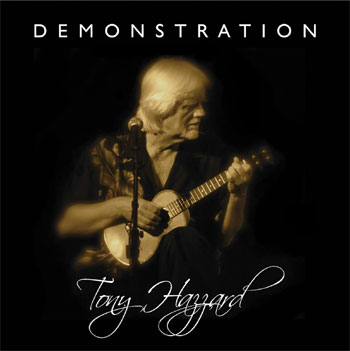 An absolutely delightful if somewhat perplexing collection, Demonstration features thirteen song by Tony Hazzard. The Liverpool-born singer, songwriter and guitarist is best known as a composer; his songs have been recorded by Manfred Mann, the Yardbirds and other sixties British bands. One of Hazzard’s most popular tunes, “Ha! Ha! Said the Clown” was covered twice: the Manfred Mann single was a hit in the UK and Australia, and a remake by Yardbirds singer Keith Relf charted in the U.S.

Hazzard’s debut album was released in 1970 as Tony Hazzard Sings Tony Hazzard; it featured his own recording of “Ha! Ha!” alongside several other originals. That album largely flew under the radar but is notable for the musicians who played on it, a who’s-who including guitarists Chris Spedding and B.J. Cole. Though the album has been reissued twice in the 21st century on small overseas labels, it’s current out of print and fairly difficult to locate.

And here’s where things get confusing. Demonstration is described in its brief liner notes by Hazzard as “a reincarnation” of Tony Hazzard Sings Tony Hazzard. With a track list that’s identical save for the deletion of Sings’ opening track and the addition of two new recordings, it tracks like a revised version of that album. But Hazzard describes this new album as consisting of demos. And his list of personnel cites six musicians, a roster that pointedly does not include Cole nor Spedding.

So why, you may well ask, is this confusing? Well, because a quick A/B comparison of tracks on Demonstration and Sings doesn’t seem to present different recordings. They sound identical. So it remains unclear what exactly the story is with regard to these recordings’ provenance.

What we are left with, then, is the music. And it’s fantastic. Leaning toward the lighter, pop side of the musical spectrum, these tunes feature inventive arrangements and excellent production values. In short, they sound not at all like demos, but like professional, finished, fit-for-release studio recordings.

Weirder still, Hazzard’s liner notes tell us that he and his team “re-recorded ‘Fox on the Run’ and ‘You Won’t Be Leaving’ again for this album.” But here’s the thing: the sound and character of those two songs is completely in line with the other tracks, and has not a whiff of modernity about it. In short, they’re great, and don’t sound like re-recordings at all. And the cover photo is clearly one of a current-day (or at least comparatively recent) Hazzard, who’s currently 78 years of age.

And just to keep you completely off balance, note that the tracks “Brown Eyed Girl,” “Hello It’s Me” and “Fox on the Run” are not the songs made famous by Van Morrison, Todd Rundgren and Sweet respectively; they’re original Hazzard songs. Good ones, too, with a hint of that veddy English borderline-baroque popsike feel that characterized many songs of that era.

Perhaps I’m making too much of all this. If we focus strictly on the music and care not about its context, we can simply enjoy what sounds like a very good, bubbling-under album from 1970, one we certainly haven’t heard until now and for which we’re grateful. And ultimately, that’s what’s important, and it’s why you should definitely listen to Demonstration.