Album Review: The Loud Family and Anton Barbeau – What if it Works? 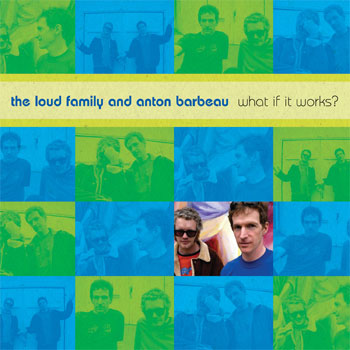 When two formidable talents get together, one doesn’t know quite what to expect. Auteurs who are accustomed to having things their own way — and who have long since earned the right to do so – can’t automatically be expected to play well with others in a collaborative venture. The product of that creative alliance might yield nothing or little of consequence.

But what if it works? That rhetorical question served as the title of a 2007 album by Anton Barbeau and Scott Miller, billed to Barbeau and Miller’s then-current band, The Loud Family.

While an emotional undercurrent informs the record, What if it Works? is largely characterized by a loose, gleeful approach to music. Both composers brought top-notch tunes, as anyone familiar with their bodies of work would have expected. And Miller’s band (mostly bassist Kenny Kessel and drummer Josef Baker but including other familiar friends as well) provides sure-footed support.

It’s the tunes and the vocals that distinguish this release. The literate music-nerd qualities that are part of both Barbeau’s and Miller’s musical mindsets are on full display here. That fact is underscored by the inclusion of the Rolling Stones’ “Rocks Off” and, humorously enough, a Miller tune called “Song About ‘Rocks Off.’”

Much of the record is an alternating between Miller- and Barbeau-led numbers, but their talents mesh most effectively when they’re digging into the work of others. Alongside the aforementioned nod to Keith Richards, a centerpiece of the album is “Remember You,” a comparatively obscure 1965 Zombies tune written by that band’s bassist, Chris White. A cover of Cat Stevens’ “I Think I See the Light” applies their combined talents to another little-known song, and yields spectacular results..

While Miller and Barbeau each brought their own unique sensibilities to the sessions, their shared unconventional approaches meshed well. Both were purveyors of pure pop who always somehow managed to twist their melodic ideas into something that – while pop – was substantially more complex than three- or four-chord ditties. What if it Works? showcases both artists in a favorable light.

And though it’s buried – placed as the final track on the original album – the title track is one of the strongest cuts on the album. Its placement speaks volumes about both Miller’s and Barbeau’s defiant, never-take-the-easy-route approach to making (and promoting their own) music.

A pair of tracks added to the original album are much more than afterthoughts; “Don’t Bother Me While I’m Living Forever” is a miniature psychedelic masterpiece, and Barbeau’s catchy “I’ve Been Craving Lately” is as good as anything on the album-proper. The music here is immediate and accessible in a way that much of Miller’s music made with Game theory is not.

An assortment of alternate takes, demos and such fill the entire disc of this Omnivore Recordings expanded-reissue release. The demos in particular help make the point that while both Anton Barbeau and Scott Miller were at the top of their game as artists in their own right, their collaboration served to improve their musical ideas and concepts. What if they had made another album? You might well ask. Alas, they did not, and Miller’s tragic death in 2013 ended that possibility. But what they left behind with this album (and its illustrative, contextualizing bonus material) is a gift to listeners.