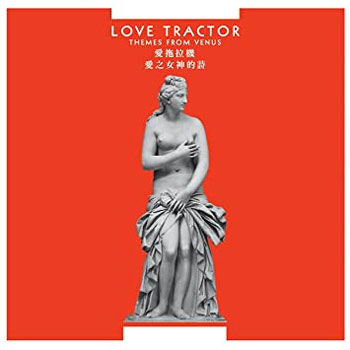 It’s worth noting that Atlanta and Athens, Georgia are a mere 70 miles apart. I mention this because back in the 1980s when I lived in the suburbs of Atlanta (I was ultimately in the metro area for some 27 years) and followed the local music scene, it was a common mistake to think of some Athens bands as Atlanta ones. We knew for sure that R.E.M. was from Athens, and The Producers were local (and some of them were co-workers of mine and my friends). But other bands we weren’t so sure about, nor did it seem to matter much.

One of those was Love Tractor. I really did think of them as an Atlanta band; they played in town quite often, their name showed up on xeroxed gig posters pasted onto telephone poles, and they released records on local indie label db Recs.

Alas, I would learn, they did in fact hail from the college town to our east. Really good band, they were. I will admit that I was unaware of any Love Tractor activity after the ‘80s ended. In 1986 they released a fine album, This Ain’t No Outer Space Ship, on the ill-fated Big Time Records. And in 1988 they were featured on the excellent soundtrack LP for the documentary Athens Georgia Inside/Out (of course they were in the film, too). I still have and enjoy both LPs; the former occupies a space on my shelf between Love Sculpture’s Forms and Feelings and Stateless by Lene Lovich.

Anyway…Love Tractor did in fact break up (or go on hiatus) in 1989. They re-formed about seven years later, made a 2001 LP and went quiet again. In recent years they’ve been overseeing reissue of their back catalog, and there’s word of a new album, expected next year.

And as I mentioned, I was unaware of anything they did – or might have done – post Inside/Out, post-Big Time Records demise. Only when a CD reissue of Themes From Venus appeared on my desk did I discover otherwise. To my delight – before I even started listening – I realized I likely had something very special in my hands, as the album was produced by Mitch Easter.

Excellent as it was/is, Outer Space Ship does inevitably feature the ubiquitous gunshot-snare sound that pegs it as an ‘80s release. Even the wonderful “Small Town” – a dead ringer for Peter Holsapple and the dB’s – does sound dated thanks to Pat Irwin’s production choices.

Made in 1988 and finding the band back on db Recs, Themes From Venus is sonically similar yet somehow less dated-sounding. The band’s roots as an instrumental unit come though in their careful and well-thought-out approach to arrangement, and the winning jangle-pop vibe of their signature sound is simply all over this record. As acclaimed music journalist Annie Zaleski writes in her excellent liner notes for the reissue, Love tractor displayed a kinship with the era’s power pop, gleefully making vocal harmonies and indelible hooks core parts of their sound; no shaggy glum shoegazers were they.

Sure, some of the keyboard textures plant the record firmly in that oft-maligned decade. The title track in particular could only have been made in that period. But hey, it’s great, using those sounds in a way that made sense, and that has aged well. Soaring melodies like “Crash” suggest what The Cure could’ve sounded like if they, y’know, cheered up a bit. Even the saxophone – somewhat (and likely intentionally so) buried in the mix – fits, with a vibe closer to Romeo Void and early Psychedelic Furs and thankfully miles away from Billy Joel and and Quarterflash.

The grit of vintage rock’n’roll meets ‘80s new wave party time on “Satan’s New Wave Soul Losers” a tune that underscores Love Tractor’s fundamental good humor. The inventive use of sounds throughout the record help give Themes From Venus its inimitable character.

Not only did I not know about this album on its original release; I had no idea that it had been so well-received critically (if not in commercial terms). If one were to make a list of albums from that period – or any era, in fact – that slipped by without the widespread recognition they so richly deserved, Love Tractor’s Themes From Venus would assuredly be an essential part of that list. So, so, so good, and enthusiastically recommended.