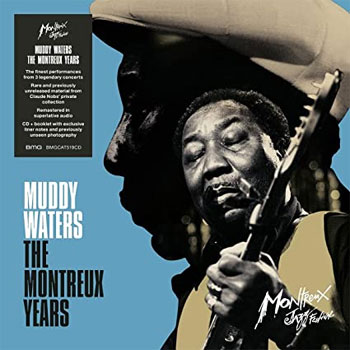 Claude Nobs was a towering figure in popular music. Founder of the Montreux Jazz Festival, he was responsible for bringing a stunning array of performers together, year after year on the stages in Switzerland. The second largest annual jazz festival on the planet, since its launch in 1967 Montreux has long taken a big-tent approach, booking artists from most every musical genre.

A new series of releases under the banner of The Montreux Years highlights some of the best music from the festival’s history. One of the latest in the series draws from three concerts featuring Muddy Waters. Sixteen tracks compiled from concerts in 1972, 1974 and 1977 capture Muddy Waters in his prime.

Waters experienced his first run of commercial success in the 1950s with a run of singles on Chess Records. After a period in the late ‘60s in which he seemed to have lost his way musically – tinkering with his approach and releasing acoustic and hard rock recordings – by the start of the 1970s Waters once again found his footing. In that decade he would earn four of his five Grammy Awards for Best Ethnic or Traditional Folk Recording. And he once again found himself a major draw on concert stages.

The Montreux Years serves as a superb live document of many of Muddy’s best-loved tunes: “Mannish Boy,” “Rollin’ and Tumblin’” and “Got My Mojo Working” among them. The performances on this newly-released set also feature songs that Waters recorded for 1974’s “Unk” in Funk, one of his last projects for Chess Records. Muddy sticks mostly to his own material, but when he turns in a reading of someone else’s song – as with Otis Spann’s “Nobody Knows Chicago Like I Do” – he makes it his own. Waters’ vocals and guitar work are assured, forceful and exemplary.

Four of the disc’s tracks come from Waters’ second Montreux appearance, one in which he was backed by a blues-rock all-star band including Buddy Guy, Pinetop Perkins, Junior Wells and Rolling Stones bassist Bill Wyman. Wyman and Perkins are on hand for the ‘77 tracks as well, joined by another top-notch ensemble including Bob Margolin.

The sound quality is uniformly excellent across the entire disc, and the post-production editing weaves together recordings from three festivals into a seamless document that sounds and feels like a single stellar performance. The intimacy of the high-fidelity recordings often approaches the sharpness of a studio date, with that vibe broken only by the rapturous applause that greet Waters and his band at the conclusion of each number.

The liner notes for Muddy Waters – The Montreux Years – written by Living Blues Editor Brett Bonner – sum up the disc’s importance in this opening statement: “It seems right that one of the greatest blues artists of all time played at one of the most storied music festivals of all time.” This new collection preserves some of those performances for modern-day listeners. A survey of Muddy Waters at the peak of his powers, The Montreux Years is also a document of a musician and performer who seems to be having the time of his life.