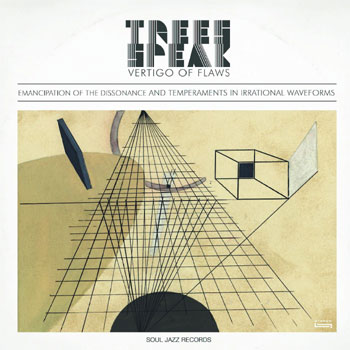 When I first heard Trees Speak’s album Ohms back in 2020 I was knocked out; the group’s knowing embrace and execution of krautrock was a stunning tour-de-force. Even though the duo is based in Arizona(!), Ohms displayed a deep and thorough understanding of what made krautrock special.

Trees Speak returned within a year with PostHuman, and that record once again took my breath away. They seemed to improve in leaps and bounds, making a record that was even more fascinating and fully-realized. I wouldn’t have thought that possible, much less likely. Daniel Martin Diaz and Damian Diaz hit it out of the park, as it were, with PostHuman. I named at as one of my Best of 2021.

Here we are in 2022, and I’m surprised once again. Vertigo of Flaws is so good that Trees Speak’s previous two releases pale in comparison (which isn’t to say you don’t need to hear and own them; you do). The duo’s krautrock textures are still very much in evidence, but they’ve managed to widen their already panoramic musical perspective to take in, process and deliver even more sonic variety.

Theirs is a variety that is still thematically linked. The different musical textures are still related. So while a cut like “Cybernetic Dream” might conjure memories of early ‘70s Tangerine Dream, elsewhere Trees Speak explores a funky, vaguely sinister vibe on numbers like “Interference.” It’s not all analog bloops; drums, electric bass and other relatively conventional types of instrumentation fit seamlessly into Trees Speak’s musical landscape. (That said, I think I might hear some Optigan in there.)

With its vibraphone and harpsichord sounds, “Computer Garden” sounds like something out of a European sci-fi flick of the late ‘70s. “Pyramid” is hypnotic, deeply psychedelic number. Comparatively short pieces are the norm here: of the nearly 30 tracks on Vertigo of Flaws, only one breaks the five-minute mark. Several clock in under two minutes, but even those sort one develop themselves fully, establishing a unique character and form.

The word cinematic applies here. And while these instrumental pieces would indeed work well to complement onscreen images, they exist as fully-formed musical works that – if the listener allows – will help create mind movies. There’s a thrilling character to throbbing instros like “Integration,” with its note-bending synthesizer cascades. “Phantom LFO” leans in a slightly more modern direction, with hints of arpeggiation and sequencing applied to its decidedly analog-sounding textures. But then there’s “Mannequin,” which transports the listener back to the era of Modesty Blaise, Our Man Flint and Diamonds are Forever.

The title track engages in a bit of Neu!-flavored motorik, while “Stasi” is considerably more upbeat and catchy than its ominous title might suggest. Bits of musique concrete make themselves known in “Traumsprache,” one of the few non-melodic cuts on Vertigo of Flaws. Some spooky violin sawing adds to the track’s atmosphere. “Cloud Chamber” offers up some vintage electric piano and jazzy saxophone squawks, applied to a slinky, sultry musical bed.

The double-LP’s artwork is nearly as notable as the music, drawing from Soviet-era propaganda graphics. With a savage Russian-initiated war of aggression raging in Europe, now might not be the ideal time to traffic in anything that suggests a nostalgia for the CCCP, but removed from that unfortunate context – the album was released before Putin unleashed his mercenaries on the sovereign Ukraine state – the retro-futurstic visual aesthetic is still kinda cool.

Trees Speak could have easily gotten away with releasing another excellent album on the order of Ohms and PostHuman. Instead they have considerably upped the ante with the brilliant, must-have Vertigo of Flaws. Let’s see where they go from here.