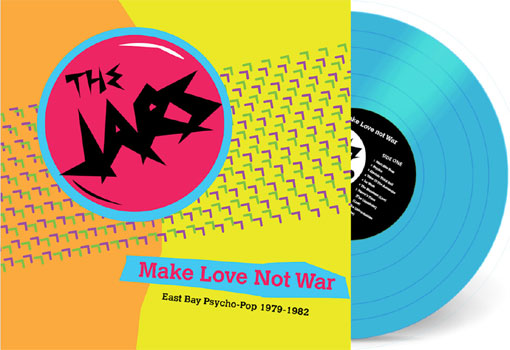 My new book, Disturbing the Peace: 415 Records and the Rise of New Wave explores the story of the Bay Area independent record label and the nearly 30 artists – most all local to the Bay Area – who released music on 415. The punk and new wave scene of the late ‘70s and early-to-mid ‘80s was centered there primarily around a handful of clubs in the North Beach neighborhood.

But the scene most certainly existed beyond 415 artists. A lively and varied musical community thrived in those years, and among the more notable acts who were just outside 415’s orbit were The Jars. The group was from just across the bay in Berkeley. That city was home to 415 acts The Uptones and Monkey Rhythm, and base of operations for Beserkley Records, the label that released music by Earth Quake, Greg Kihn, Jonathan Richman and a personal favorite of mine, The Rubinoos.

The Jars were tuneful, but more adventurous perhaps than most of their aforementioned Berkeley brethren. Their sound folded in elements of punk and new wave, for sure, but in their music one can also detect the influence of garage rock, surf and even krautrock. That last one would have been particularly edgy in an era when bands like Neu! and Kraftwerk were considerably less well-known than they are today.

The Jars’ story is connected to that of Flipper, but then the scene in the Bay Are was small enough that most every band’s history overlaps, intersects and intertwines with other story lines. They shared bills with the Dead Kennedys, but The Jars’ sound was quite a bit more accessible and rooted in melody.

And though the band ceased operations long ago, you needn’t simply read about The Jars. A new compilation, Make Love Not War collects fifteen tracks recorded between1979 and ‘81 or so. Five of the tunes have previously seen release, albeit on local labels Subterranean and Universal (no, not that Universal) Records back at the dawn of the ‘80s. Those tunes – from a three-song EP and a single – make up Side One of the new LP.

“Start Rite Now” is nervy new wave pop, with delightfully cheesy Steve Nieve-flavored Farfisa keyboards (courtesy of a musician with the wonderfully apt pseudonym of Gary Nervo). “Psycho” is a cover of the Pacific Northwest garage classic, and while it’s recast here in a new wave style, the spirit of The Sonics’ original shines through. “Electric Third Rail” sounds a good bit like the sort of thing Guadalcanal Diary was doing in the suburbs of Atlanta, albeit with some manic vocalisms added. A listen to “Time of the Assassins” suggests that The Jars were listening to both Television and reggae; the song is a synthesis of those seemingly incompatible sensibilities. As you might guess from the title, “Jar Wars” is a peppy instrumental number, showcasing some twangy surf guitar and more of Nervo’s appealing, straightforward keyboard work.

Three live cuts round out the record’s first side. A pilled-up reading of the Munsters Theme is a great deal of fun, and the comparatively thin fidelity detracts not a bit from its appeal. “Nervo’s Tune (The Liquidator)” moves more in an Attractions direction, sans vocals. Completing the live trio of instrumental tunes is a cover of Nelson Riddle’s Untouchables theme. (Anyone sensing a, er, theme here?) These three cuts are pretty much a Nervo showcase, though lead guitarist Michael Montalto takes his turns as well.

Side Two of the LP features previously-unheard tracks. Five of those cuts were produced by famed engineer Gary Hobish at Fantasy Studios. The instrumental “Make Love Not War” dials back the keyboard textures just a bit in favor of a wiry electric guitar sound. Vocals return (courtesy rhythm guitarist Mik Dow) on “Turn Out the Light.” Some guest trumpet overdubs and Nervo’s switch to Hammond (or similar) give the song a dramatic and very different flavor from anything we’ve heard before from The Jars.

“You and I” is a reasonably interesting mostly-instrumental number, with some catchy lead guitar work oddly buried in the mix. “Boys Night Out” is the closest thing The Jars would come to a conventional pop-meets-new wave tune, and by that measure it’s a pretty solid effort. “Teenage Rebellion” features slashing guitar work to match its title; here the band sounds a bit like what might happen if The Motors had a Farfisa Compact Duo.

A pair of live tracks taken form two separate performances at San Francisco’s Old Waldorf wrap up the LP. Underscoring the fact that – occasional vocals aside – The Jars were primarily an instrumental outfit, one influenced by the greats, they turn in a superb, new wave flavored cover of Booker T & the MGs’ “Time is Tight.” A live version of their original “Jar Wars” ups the energy from their studio version.

This new vinyl release comes complete with a nicely put together four-page booklet that tells The Jars’ story in words and images. The record is pressed on baby blue vinyl and the package include a download car for digitally-inclined listeners. As an artifact that captures a significant piece of the Bay Area new wave character of the era, Make Love Not War is recommended.