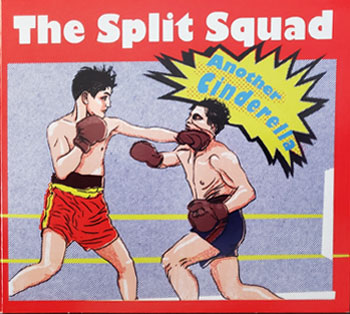 The “supergroup” label is tossed around far too wantonly; in proper usage, it should only be applied to groups that feature members who have all achieved notability (or at least notoriety) individually and/or as members of other groups. By that strict measure, The Split Squad is indeed a supergroup, and a super one at that.

Guitarist Keith Streng is best known as a founding member of New York City garage rock heroes the Fleshtones. Eddie Munoz was in one of powerpop’s most underrated outfits, The Plimsouls. Clem Burke was (and is) the drummer in Blondie. Josh Kantor plays with another supergroup, The Baseball Project. And Michael Giblin comes from Cherry Twister, an underappreciated group best known to those lucky few who’ve scored a copy of the now-somewhat-rare compilation Yellow Pills Vol. 3.

All of that talent in one studio seems likely to add up to something special, and in fact it does. The songs are varied in style, but most fit neatly into a sort of uptempo, jangle-rock, powerpop and/or garage rock bag. Multi-instrumentalist Giblin contributes the most memorable set of songs, with numbers like “Sinking Ship” mining a chiming vibe that sticks in the listener’s mind long after the song finishes.

Giblin’s “Taxicab” in particular is filled with Revolver-era massed harmonies and Rickenbacker bliss. And another of his cuts, “Invisible Lightning” rehabilitates the kind of stomping beat associated with Gary Glitter (yikes) before Glitter fell out of favor for his, er, extramusical pursuits. And the tune features a guest solo from the inimitable Jason Victor (Matthew Sweet, Dream Syndicate).

Streng’s tunes lean in a more rifftastic direction, with his hoary vocals peeling the paint off the studio walls. “Showstopper” is a case of truth-in labeling: it rocks hard, giving Burke in particular a golden opportunity to let loose with reckless abandon. Streng’s brief lead guitar break is a thrill ride, followed by a wild keyboard-bashing solo from Kantor.

“As Bright As You Are” is an outlier, a piano-based power ballad that — while solid — feels in this context a bit like Bad Company’s lyrically and thematically similar “Shooting Star.” Put another way, it works, but seems out of place.

In addition to Victor, guests on the record include Scott McCaughey, Joe Adragna (The Junior League) and Deni Bonet. But the guest spots don’t detract from the cohesive character of the album. Beyond the tracks discussed here, there are plenty of other highlights among the 12 cuts on Another Cinderella. Pick it up and discover for yourself.