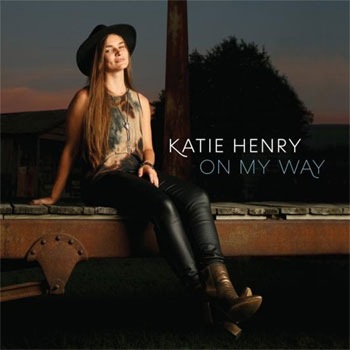 A New Jersey native, Katie Henry honed her craft paying blues clubs in and around New York City. Her 2018 debut album, High Road earned enthusiastic critical notices as well as nominations by the IBMA and Blues Blast. Her second album (and first for Ruf Records), On My Way is scheduled for release on January 28.

Piano is Henry’s primary instrument, though On My Way features her electric guitar work as well. As was the case with her 2018 debut, all ten of the new album’s songs are Henry originals, co-written with slide guitarist/bassist Antar Goodwin. Produced by Ben Rice in New York City in May 2021, On My Way was largely cut live in the studio, and the ineffable quality that comes from that approach shines through on the finished recordings.

High Road displayed a sound rooted in the blues, but informed by soul, jazz and a bit of country. On My Way builds upon that while signaling a more focused turn toward the blues. From the stomping title track that opens the record, On My Way delivers a harder edge than its predecessor. “Empty Cup” is in turn sultry and bouncy, a playful, slinky number with some tasty barrelhouse piano textures.

Goodwin’s slide provides the opening hook for the uptempo “Without a Fight.” Here Henry switches to Wurlitzer electric piano. Those two instruments dominate the sprightly arrangement, giving it a “countrypolitan” feel. Henry’s assured yet relaxed lead vocal shows that her time spent gigging in NYC bars helped her develop a distinctive vocal personality.

The blues-rock “Bury You” features the same insistent quality that characterizes the title track, but some appealing guitar riffage takes the song in a different direction. Henry takes a sharp stylistic turn for “Setting Sun,” a quiet, contemplative number that starts with acoustic guitar and subtly builds to a fuller arrangement. Together, her yearning vocal and some melodic lead guitar heighten the soaring mood as the song winds toward its conclusion.

“Got Me Good” brings things back toward a blues feel. A mid-tempo tune with a breezy melody worthy of ‘70s era Fleetwood Mac, it’s among the more mainstream-leaning tracks on On My Way, yet it remains true to the blues-leaning aesthetic of the album. With some of the album’s best lyrics, “Blessings” is country blues, with lovely piano figures reinforcing that feel.

Blues harpist Giles Robson lends his unique talents to the thumping “Too Long.” His deftly-placed harmonica breaks spar with some of the album’s heaviest guitar lines. Henry’s keyboard work is placed in the background on this one, giving her more space to emphasize some of her most assured lead vocal work. Kurt Thurm’s gurgling organ adds even more appeal to this fully-developed track.

“Running Round” has a character that evokes thoughts of a late night set closer. Initially doing away with everything but Henry’s vocal and piano, “Running Round” unfolds gradually, adding the faintest bits of guitar, drums, bass and organ. All of those instruments provide understated support. It’s only in the final minute of the song that the entire ensemble kicks into full gear; at that point, the stately tune takes on an anthemic quality. It’s quite easy to imagine the song – just over four minutes in its studio version – going on twice as long onstage in front of an appreciative audience.

On My Way closes with “Catch Me if You Can.” It’s a successful hybrid of windswept Americana (with a storytelling quality) and a blues feel. The song’s lyrics seem to acknowledge the musical journey upon which Katie Henry has embarked, as well as expressing optimism regarding her future. If the consistent quality of Henry’s second album is any indication, there’s good reason for that optimism.

Concurrent with the release of On My Way, Henry has an eight-date run of live shows on the East Coast; those will be followed in short order by a spot on Ruf’s 2022 Blues Caravan Revue, with 20 dates in February and March across Germany, wrapping up in Berlin.