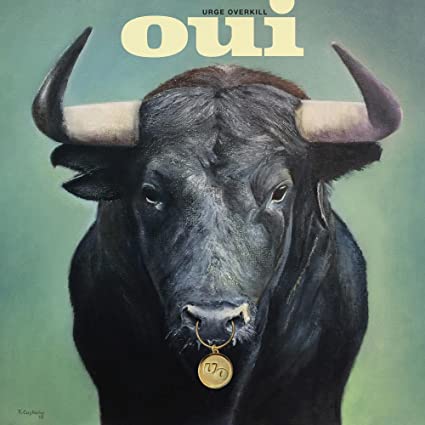 When we – okay, when I – last checked in on Urge Overkill, they were riding high on the breakaway success of Saturation. That was 1993, nearly three decades ago. Yes, they did release Exit the Dragon in ’95, but I don’t recall any of its tunes surfacing on “alternative” (commercial) radio at the time, and a succession of tepid reviews meant I didn’t investigate further. And 2011’s Rock & Roll Submarine, well, I only discovered that about thirty seconds ago.

So here we are in 2022, greeted by Oui. And it’s like Urge Overkill never left. The same seething, snaky (and slightly scuzzy) vibe that characterized Saturation is largely intact. Hurray for that! A cover of George Michael’s “Freedom!” opens the disc, and it’s pretty great, though the arrangement sounds as if they threw it together with a few minutes left on the studio clock.

Much better is “A Necessary Evil,” an original tune that serves up all of UO’s assets in the space of a few minutes. “Follow My Shadow” sounds very much like the Urge of old as well, with tightly coiled roaring guitars, and a rifftastic pop sensibility applied to energetic and appealing arrangements.

“How Sweet the Light” all but leaps out of the speakers, ; like most of the tunes on Oui, the song seems in a serious hurry to get started. No fade-ins or mucking about for King Roeser and Nash Kato; their approach to songcraft has that in common with Raspberries (of all things).

If you believe that the early 1990s were a great time for melodic, hard-driving alternarock, then Oui gives you the opportunity to pick up new music that will take you back there. The rock era may – as pundits tell us – be behind us, but Urge Overkill clearly didn’t get that memo. Let’s not tell ‘em. And let’s hope they’re back for good this time.