Album Review: John Lodge — The Royal Affair and After 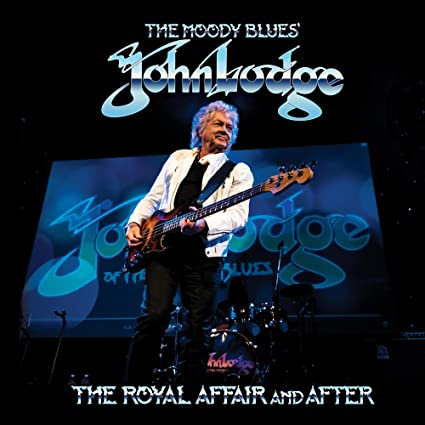 The Moody Blues are beloved among their fans. Their initial run of albums is as consistent a colleciton of releases as you’ll find in the rock canon; each has hits, excellent deep album cuts and a cohesive character. The group went on hiatus for awhile after Octave, and when they returned in the MTV era, they sidestepped nostalgia by crafting another run of releases. Those might not have equaled the grandeur of the early material, but they were solid records, and they earned their hit status.

The group toured pretty regularly in those days and beyond. But after a Christmas album released at the start of the new century, the Moodies seem to have made a decision – or perhaps the marketplace made it for them – to focus on live performance; there would be no new music.

The band’s lineup varied quite little from beginning to end: when founding keyboardist Mike Pinder left, he was replaced by Patrick Moraz (we won’t get into that story here). Ray Thomas retired in the ‘00s, and with the core band down to three, they continued with auxiliary members.

Those three – all of whom had been on board since Days of Future Passed, or before – were Justin Hayward, John Lodge and drummer Graeme Edge. The last of those retired in 2018 and sadly passed a few months ago, and that will have seemed to spell the end for the group.

But bassist John Lodge remained busy; after Edge’s retirement, he signed on for the “Royal Affair Tour” alongside Yes, Carl Palmer’s ELP Legacy, Arthur Brown (he of the Crazy World) and Asia. That package tour brought nostalgia of a prog-meets-pop type to a multitude of fans.

The Royal Affair and After is a new release culled from those shows as well as another Lodge tour in which he presented Moody Blues songs without his old band. Featuring a band that – if we’re honest, and we should be – rocked harder than the Moodies ever did, these songs breathe life into classic material.

“Steppin’ in a Slide Zone” was a hit at the tail-end of the band’s ‘70s run. In Lodge’s solo version, the band kicks, but the vocals are oddly loose-limbed. It’s the kind of performance one might be surprised to hear on an official release. “Saved by the Music” is something of an obscurity; it was first heard on Blue Jays, a Lodge-Hayward side project. The energetic reading here is nicely put together.

“Legend of a Mind” is dedicated to the late Ray Thomas, and it’s a faithful arrangement. Same is true for “Sunset,” a stellar deep track. Old pal Graeme Edge guests (or does he?) on “Late Lament.” Yes vocalist Jon Davison takes the lead vocal on “Night in White Satin,”giving it as very different character from the original (the arrangement is faithful, though).

“Gemini Dream” hasn’t aged well; unlike the group’s timeless material, it sounds very “’80s.” It’s still fun, though. “Isn’t Life Strange” doesn’t quite capture the feel of the original – the keyboard textures feel a bit off, somehow – but it’s delivered with enough emotion to succeed.

“I’m Just a Singer (In a Rock and Roll Band)” sounds like the late-period Moodies; it’s easily the most spirited number in the set. Set-closer “Ride My See Saw,” however, has a PBS pledge month special vibe; something about it – probably the keys again – fails to capture the Moody Blues signature sound. Perhaps that was intentional: there’s nothing actually wrong with the arrangement, but for Moodies purists (if such souls exist) it might not strike quite the right chord. Lost chord indeed.

Taken for what it is, though, The Royal Affair and After is a solid collection, in no way an embarrassment to those involved. It won’t replace any of your Moody Blues albums – nor is it intended to do so – but ultimately it’s as fine a tribute to Lodge’s old band as one could hope for.

You may also enjoy my interviews with…