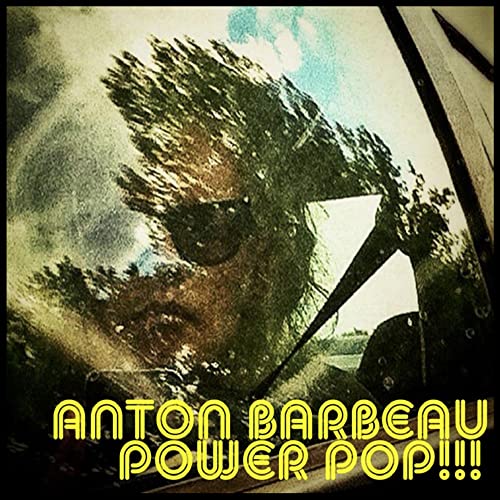 Anton Barbeau is nothing if not prolific. The man churns out album after album at a frenetic pace. But there’s an important quality that sets him apart from others who produce a massive body of work – I’m looking at Robert Pollard and R. Stevie Moore, to name two – and that’s quality. Whereas some artists seem only to record every idea they have and then release it all, leaving it to the discerning listener to, well, discern, Barbeau’s output has the hallmarks of an artist who combs though his material and selects only the really good stuff for release. Happily for his followers, there’s a whole lot of it.

Which some 100 words later, brings us to Power Pop!!! Yes, Barbeau – he who is possessed of finely-tuned senses of humor and irony – has the moxie to embrace that descriptor/epithet. But in a gleefully perverse move, the album’s opening cut (“Entre-Vous Dans Les Maisons”) couldn’t be any father afield from that style. The second song – the title track – is closer to it, featuring a great melody – but it’s far too quirky to qualify. And that’s all to the good-to-great.

Barbeau is remarkably skilled at combining outré sonic and lyrical elements with ear-candy melodies, and Power Pop!!! provides a textbook example of his abilities in that regard. His song titles are sometimes reliable indicators of a tune’s character (you’d expect “The Never Crying Wolf Boy” and “Slash Zed Zip” to be a bit left-of-center, and indeed they are) but not always. “The Drugs” is a slice of baroque pop a la Sgt. Pepper-era McCartney crossed with a bit of Robyn Hitchcock obliqueness.

Topical songs abound. “Julian Cope” is about Barbeau’s fellow cult artist. But “Free” isn’t a song about Simon Kirke et. al. And sonic experiments – a regular feature of Barbeau’s records – feature prominently: three song snippets occupy the middle of the track list. They don’t fit together in any discernible way: one is all of six seconds long, barely enough time to spit out its title – but one suspects their creator knows what they’re about. For us, it’s merely to enjoy, perhaps ponder, and move on to the more fully-realized tracks.

“Running on the Edge of the Knife” is such a tune. It sounds very much like the kind of song one might have heard in the soundtrack to a John Hughes film. “Whisper in the Win” has an ‘80s feel, too; had Ant decided to make his latest album a thematically retro-focused set, the sessions for Power Pop!!! could have yielded a great deal of the source material.

The run of tracks that bring the album to its conclusion are among the most accessible. That, of course, runs counter to the “rules” of album sequencing. But Anton Barbeau operates outside the framework of any such rules. Thank goodness for that. Standing things on their head is his trademark, or one of ‘em. The album ends with a song called “Prologue, Literally.” Because of course it does. It might have fit on one of his krautrock albums, but it’s lovely here.

Alas, this album is decidedly not what its title advertises. That’s its strength, though: with Anton Barbeau, you never know quite what you’ll get. But you can count on it being compelling, fascinating and worthy of deep listening. And if the title tricks the unsuspecting listener into discovering the wonderful world of Barbeau, then the deception if forgiven. The rewards are many.