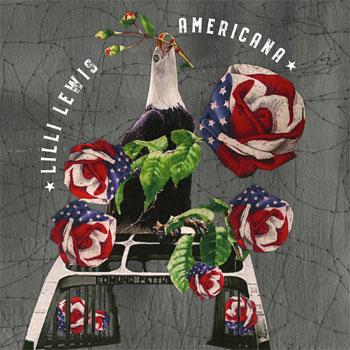 Americana is the seventh album from Athens, Georgia based Lilli Lewis. While the album title might suggest a specific kind of music, there’s something deeper going on here. As Lewis uses the term, Americana represents a kind of music featuring lyrical themes connected to the American experience. The music itself has at least as much to do with gospel, soul, funk and blues.

Americana opens with the stirring, deeply soulful “My American Heart (Prelude).” Its brevity establishes the track as an introduction to a thematically linked set of songs. And “Copper John,” a storytelling country weeper with evocative pedal steel, follows through on that promise. Employing vivid lyrical imagery, Lewis writes and sings of prophets, citadels and watchmen, all in the first moments of the tune.

“Wrecking Ball” is a statement of purpose. “I don’t want to fight for freedom,” Lewis defiantly tells us over a funky, clavinet-led groove. “Freedom is a right from birth.” And that kind of assertive (yet hard to argue with) statement defines the track. Lewis is only mildly metaphoric when she sings on the rousing chorus, “”Everything with a wrecking ball…tear the walls down.”

The double entendre/punning title of “Piece of Mine” displays Lewis’ mastery of language. After a church harmony vocal intro, the song settles into a somber, minor-key melody reminiscent of field hollers. But as the song develops, it takes on the spare instrumental characteristics of country.

“If It Were You” is folk pop, with a yearning fiddle accompanying Lewis’ wonderfully supple and expressive lead vocal and some gentle acoustic picking. And Lewis’ approach to arrangement places the needs of the song first: her instrument is piano, but if a song is best served by leaving piano out of the mix, that’s the path she takes, leaving her large cast of guest musicians to do what they do best.

A prime example of that approach is found in Josh Paxton’s buttery Rhodes electric piano, featured as the instrumental backbone of “One Shoe.” Bass guitar solos aren’t commonplace in blues or Americana, but Kenny Murphy’s low-register spotlight on the track is an unexpected treat.

Lewis does display her understated facility on the ivories during “Fly,” an emotional tour de force worthy of Carole King or Roberta Flack. And she digs deep for the sultry “Wednesday’s Child.” Nothing about the song’s arrangement suggests that pedal steel will appear midway, but when it does, it fits perfectly.

And “Everyday” combines all of Americana’s many virtues into a single track. It’s a testament to Lewis’ well-placed self confidence that she places the album’s strongest number halfway through the record. The music is so inviting that casual listeners might miss the strength of Lewis’ lyrics on first listen.

“A Healing Inside” features a guest vocal by Lady A (herself an unwitting party to a minor artist naming controversy). The song’s deeply layered vocal harmonies negate the need for instrumental accompaniment, and there is none.

“Coffee Shop Girl” is a lovely meditation, and “The Great Divide” is a gentle groove with a characteristically thoughtful lyric. Americana ends as it should, with a benediction in the form of “My American Heart.” It’s a fully-formed artistic statement from an important musician and lyricist.