Album Review: The Jazz Butcher – The Highest in the Land 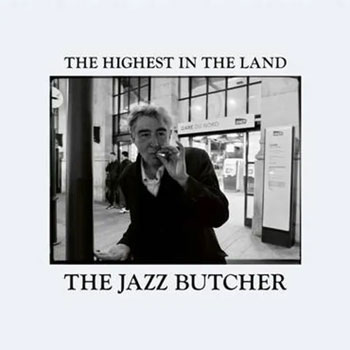 I first stumbled upon the body of work by The Jazz Butcher (aka Pat Fish) way back in my college days. I happened upon a copy of Bloody Nonsense, a well-chosen best-of compilation released in 1986. I was immediately taken in by his deft synthesis of what viewed as Things That Do Not Go Together: jazz, punk and a razor-sharp, literary-grade lyrical wit. That same year I also picked up a new Jazz Butcher (Conspiracy) record called Distressed Gentlefolk, featuring the demented, vicious and lovely anti-love song “Who Loves You Now?” It’s a stone classic.

I was fortunate enough to actually see The Jazz Butcher live onstage a few years later in Athens, Georgia; must’ve been 1990 or ‘91. Great show, focusing on material from then-recent releases Fishcotheque (1988) and Big Planet Scarey Planet (1990). I owned and still enjoy both of those LPs.

Once the internet era got underway – but years before getting on Facebook – I found myself in communication with the man. In my bootleg collecting hobby of those days, I had scored a rare and lovely recording of his group playing at a wedding reception. He asked me if I’d make a copy of the tape for him, which of course I did. As thanks, he sent me some of his music that I didn’t already own.

We remained in touch sporadically; that mostly took the form of me watching his videos posted online. Most recently I watched a few solo performances he did during the lockdown phase of the global pandemic. Little did I know that his time on this planet was rapidly nearing its conclusion. Fish knew – or strongly suspected – that was the case, and that sense informs what will now be his final release, The Highest in the Land.

As a longtime fan, I was pleased to note the participation of guitarist Max Eider; not to take anything away from Fish’s talents, but Eider’s work on those ‘80s albums is a key ingredient of what makes them special. (His own very like-minded solo LP The Best Kisser in the World is a must-have, should you be able to locate it.)

With maturity can come subtlety. And while Pat Fish has always has the ability to exert a light touch, on Highest, it’s his primary method. Right out of the gate, “Melanie Hargreaves’ Father’s Jaguar” adopts a café society vibe, with hints of Noël Coward and Cole Porter. The song’s instrumental breaks feature lovely lead guitar (by old pal Max Eider) and a separate melody on muted trumpet by Simon Taylor. The closest the record comes to rocking out is “Sebastian’s Medication,” but what the record might lack in electric oomph it more than makes up for with emotional intensity. Holding his passing in mind while taking in the closing track, “Goodnight Sweetheart” might bring a tear to your eye.

While the music is the thing, the cover design merits mention. From its layout to its choice of typeface, The Highest in the Land echoes Fiscotheque. Is that a subtle means of connecting Fish’s final album with one of his most high-profile releases? Perhaps and perhaps not. But the music is a delight, even when – as on “Amalfi Coast May 1963” – there are no words.

Gentle lyricism is the defining feature of the album. While hints of the younger, wiseacre Pat Fish crop up in “Running on Fumes,” for the most part snark is dialed back, replaced by a more thoughtful and serious tone. True, against the backdrop of Fish’s passing, it’s impossible to disentangle one’s thoughts connecting to his loss with one’s processing of this material. But what is clear is that the final word form The Jazz Butcher is a lovely one, a warm and wonderful parting shot from a master.