We’ve talked about Hipgnosis rarely having a brief from most artists. Specific to Pink Floyd, there seems to be an undercurrent of melancholy, and themes of absence, loss, distance and things like that in a lot of your work for Pink Floyd. I’m curious: how much of that comes from your efforts to create a visual to sort of match the aesthetic of the music, and how much of it is based on any sort of brief or even suggestion from David Gilmour or anyone else? 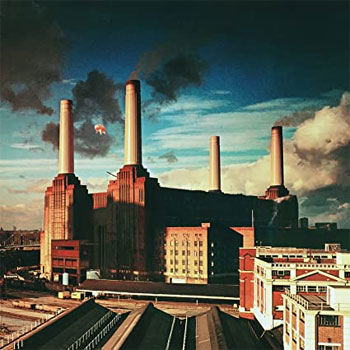 No brief or suggestion, generally, but I have to say that, because we were very close with Pink Floyd, both on a social and friendship level right from the Cambridge days, we were often at Abbey Road or wherever they were recording and would pick up information. The perfect example of that is things like Wish You Were Here where one knew what the album was about. I’d heard the album, and so had Storm, and understood that it was about absence. It was about insincerity in the music business, and it was about the loss of Syd Barrett. So, one immediately knew and identified with imagery that had to be of that subject.

[When dealing with] a person like Roger Waters who’s incredibly cerebral and deep thinking, you can’t muck about with trite images. They’ve got to be things that are relatively serious and to the point and to the subject. Otherwise, you’re dismissed out of hand, and quite rightly so too. So, I think that works.

But also The Dark Side of the Moon, interestingly enough, when we went to present a bunch of ideas to the guys at Abbey Road, I remember they didn’t like any of them. Richard Wright said, “You know, I’m really fed up with your surrealist pictures,” which was very hurtful for me and Storm. So, he said, “I fancy some singular image, something that just identifies with us in a very simple way, something graphic like a chocolate box.” This wasn’t Storm’s or my style at all, so we left the studio rather depressed.

Then, about two weeks later, I was thumbing through an American kids’ book which was all about prisms and glass and spectrums and stuff like that – it was an educational book – and Storm was standing next to me, and he suddenly went, “I’ve got it!” And he went like that [makes a triangle] with his fingers. He said, “A triangle of a prism with a light source going through it,” which was exactly what was in this book. I said, “Okay! How do you mean?” He said, “Draw it on a piece of paper.” So, I sketched it out on a piece of paper. Then, we took it up to Abbey Road, and Storm said, “’Well, how about this?” And I remember they all went, “That’s it. That’s exactly it. It sums up Pink Floyd.”

And it did, because Pink Floyd, at that time, were playing The Dark Side of the Moon live before they’d even recorded it. In those days, they played in the dark. They had quite an extensive light show. They had dry ice that floated over the stage. They had a big circular screen behind them, so it was all about the theatrical show, what Roger Waters termed as the “electric theatre,” and David Gilmour often played with his back to the audience. So, nobody really knew anything about these enigmatic characters that were called Pink Floyd. Somehow, that darkness and the brightness of the lights and the show and all that sort of stuff summed them up totally.

From this singular source came this rainbow, and somehow, if you’d said to me, “How come this iconic cover has lasted so well?” I think, if the album had only sold 1500 copies, I don’t think people would’ve taken much notice of it. Because it sold 45 million and has been seen by millions around the world and is identified with Pink Floyd, I think we’ve been very fortunate to have benefited from that.

Can you share any hints at all about projects that are in the works but haven’t been announced yet, especially with regard to Pink Floyd?

Well, of course, in March 2023, there’s the 50th anniversary of The Dark Side of the Moon. So, I’m currently working on that, and that’s going to be quite a global thing. I can’t discuss it, because I’m under wraps to keep quiet about it but, you know, there will be something quite extravagant to go with that.

Don’t ask me if the band is going to get back together and play, because they’re not.

I would not ask that question!

Never say never, but right now, I can’t see that ever happening. Nevertheless, this will be a big celebration, and that’s something that I’m working on. Also, the new re-release of Animals which is a remix which is coming out. I’ve re-shot the pig over the power station, which was Roger Waters’ original concept for that. Again, there’s a thing where that concept was not Storm’s or my own or Hipgnosis’ idea. This was a Roger Waters idea which I fulfilled for him, and that I re-shot at night over the power station, and it looks amazing. So, there’s going to be a different front cover there and a different take on it, something really fresh. Something for me to revisit like that has been an absolute joy.