Home  »  new release • pop • review   »   Album Review: Novelty Island – How Are You Coping With This Century?

Album Review: Novelty Island – How Are You Coping With This Century? 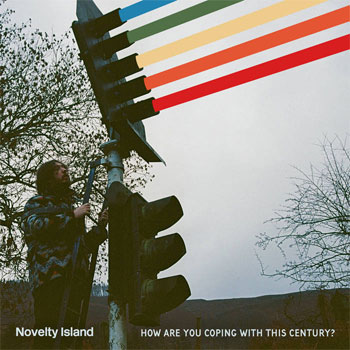 Being a musician and recording artist from Liverpool carries with it certain responsibilities. One has to reconcile the fact that their music is made in the shadow of Echo and the Bunnymen (ha). But seriously, much is expected from those who create music in the city on the Mersey. It’s not clear if Tom McConnell is aware of this, but everything about his music suggests that he is more than up to the task. Working as Novelty Island, McConnell is another in the proud tradition of one-person “bands,” creating music that sounds as if it’s the product of a very, very good collective of musicians who are all tuned to the same musical wavelength.

How Are You Coping With This Century? opens on an acoustic note, with a sound reminiscent of the Iveys (later known as Badfinger.” The song’s arrangement unfolds subtly, and the song takes on a character eerily reminiscent of Emitt Rhodes (who, of course, was often compared to a certain Liverpudlian bassist).

McConnell’s vocal harmonies might well be his most formidable asset. But that’s certainly not all he has to share. Sinewy, economic lead guitar lines adorn his tunes. His stylistic palette is staggeringly wide: “Cowboy on a Bicycle” is country rock, British variant: think of Brinsley Schwarz or Unicorn. And the lovely keyboard textures that open of “Michael Afternoon” suggest Pepper-era Beatles, but then the tune heads in a different direction, one that suggest ‘60s Kinks meeting up with their early ‘80s sound.

McConnell isn’t afraid to craft spare, simply arranged tunes; his melodies are strong enough that they don’t demand filigree. “Ladybird” is a prime example of this. The wonderful and aptly-named “Jangleheart” is a bedsit analog to The La’s “There She Goes.” The parlor room piano of “Blackcurrant Sky” gives way to a pop-sike arrangement that suggests Orgone Box, albeit with some delightfully twangy electric guitars woven into the mix.

“Citrus Wood” would have fit nicely on Wings’ Wild Life or Red Rose Speedway. “Listen” evokes thought of Pilot crossed with Gilbert O’Sullivan. “Blank Wine” has a breezy, ‘70s AM radio pop sheen. “I’ll Sleep in April” is a sweet bit of ear candy, a supremely sturdy melodic work with some bass guitar that will call to mind “Silly Love Songs.”

The closest thing to hard rock on How Are You Coping… is “Turtle Rock.” It’s an effective excursion, and underscores the range of abilities that lie within McConnell’s bag of tricks. The album closes on a more contemplative note, though, with “Yes.” It’s a quiet, understated and finely-wrought number featuring close harmony vocals and a spare instrumental backing. The song brings things back to that sweetly innocent Iveys vibe that opened the record.

Start to finish, Novelty Island’s debut full-length is an intimate and luxurious listening experience. And it should make the city of Scousers quite proud.