Album Review: The Freeway Jubilee — On the Horizon Volume 1 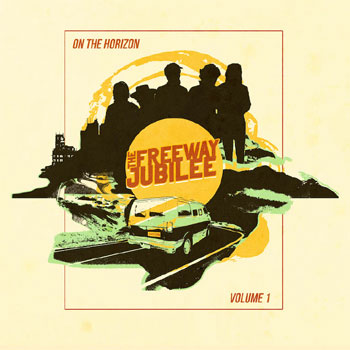 The close vocal harmony that opens “In Motion” sets a mood and establishes a high bar. The first track on The Freeway Jubilee’s On the Horizon Volume 1 is suffused with positivity and enthusiasm. And the band’s appealing mix – augmenting rock’s traditional guitars/bass/drums configuration with baritone and tenor saxophones – highlights the deep connections between gospel, Southern rock, jam and good old, good-timin’ rock ‘n’ roll.

The lyrics to “In Motion” include a nod to the band’s rock ‘n’ roll heroes, and the tune shares some subtle similarities with Steve Miller Band’s “Jet Airliner.” But this Asheville, North Carolina band has more than enough good musical and lyrical idea of its own, so they can safely engage in the occasional tip of the hat without losing their identity in the process.

Most of On the Horizon Volume 1 was self-produced in sessions at the band’s home studio in Western North Carolina, led by bassist Kenny Crowley. And while there’s an organic vibe to the sound, there there’s nothing homemade in the production aesthetic; the recording is professional without being slick. The band’s approach to these sessions clearly focused on documenting what they sound like live onstage, while making the most of the crystalline sonic values that a good studio can provide. The sound is equal parts “big” and intimate; spin the record or CD at a suitable volume, and you’ll feel like you’re right there in the room with the five-man band.

Crowley’s funky bass line and Hunter Parker’s beefy one-man horn section are merely two of the superb ingredients in the tasty, soulful stew of “Sunlight Stream.” The gospel vibe that kicked off the album continues through here (and beyond), but when Crowley sings about the great outdoors being the “only kinda churchin’ a man like me could ever need,” it’s clear that any preaching The Freeway Jubilee might engage in is of the big-tent variety.

Jonathan Clayton’s searing slide work on “Sunlight Stream” deserves special mention. Like a good studio arrangement, the song features a solo that demands attention, but wraps up quickly. It leave the listener wanting more. But then, that’s what live show are for.

Things do get a bit more explicitly devotional on “Not the Same,” but The Freeway Jubilee (who collectively compose all of their original material) take an approach not unlike the one George Harrison sometimes used: there’s enough wiggle room in the lyrics that the listener can interpret them to be about the Lord, a parent or other loved one. That skillful approach to songwriting is a hallmark of the group’s work, and only adds to the enjoyment of the music.

The stirring “Rugged & Free” seamlessly shifts from a gospel fee to jazz to blues and back again. The record’s lengthiest tune at nearly ten minutes, its doesn’t waste a second. The jazz feel comes from Parker’s extended solo and fills, and Clayton’s piano and organ solos add some r&b. Listen closer and you’ll hear an ode to some of music’s great legends. Stick around for a soaring lead guitar break that’s the icing on the cake, and you’re experiencing the strongest cut on the album. Even a brief bass solo doesn’t seem the least bit indulgent.

The ballad “Let Me Try” sounds like a Lynyrd Skynyrd deep album cut, and Clayton’s piano lines really Billy Payne’s work. The uptempo “Reachin’” concerns itself with matter of the soul, and the indefatigable optimism of the song is a welcome balm in the pandemic era. Parker’s baritone sax solo adds heft to an already solid number, and the way the arrangement slides effortlessly into a guitar solo is masterful.

On the Horizon Volume 1 ends as it began, with a song built upon a foundation of gospel harmony. “Humble Song” starts out by reminding listeners of this outfit’s vocal versatility. And once that’s done, the band moves into a gentle, countrified melody complete with cheery bits of harmonica. And as the four-minute mark approaches, the band shifts gears completely, turning in a honky-tonk melody that conjures mental images of bar stools being upended as the bar closes for the night. And then the band crowds around the vocal mic, warm smiles on their faces, to sing us home. But after spending time with Volume 1, the audience eagerly awaits a second volume from The Freeway Jubilee.