This story was part of a larger feature – a collaboration with Nick Veronin – previously published in SF Standard.

As Metallica prepares to celebrate its 40th anniversary with December’s “San Francisco Takeover” – concerts plus a raft of related events – it’s the perfect time to take a look back at the career of the celebrated metal band, and to explore the musical and larger cultural relevance of Metallica and its music.

When Metallica burst on the scene with their debut release, 1983’s Kill ‘Em All, the record made only a small ripple on the commercial landscape of popular music. But along with a select few other bands – Anthrax, Megadeth and Slayer – Metallica had pioneered thrash metal. Taking inspiration from both punk and late ‘70s New Wave of British Heavy Metal, Metallica created something that was at once familiar and new. 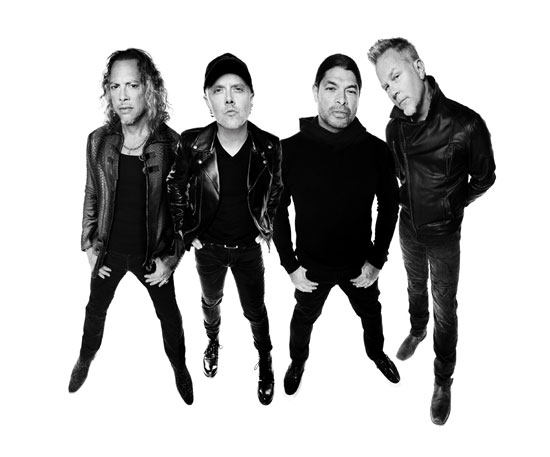 Though the record would earn triple-platinum status (3 million copies sold in the U.S.) some 16 years after its release, the influence of Kill ‘Em All upon the metal scene far outpaced its initially modest chart action. An entire generation of metal bands would retrospectively cite Metallica’s debut as an influence. The breakneck tempos, thunderous bottom end and shredding lead guitar work of Kill ‘Em All established a template that the band could have followed indefinitely.

But by the time of Metallica’s breakthrough – and major-label debut – Master of Puppets (1986), the band had further refined and expanded its musical approach. An exemplar of thrash metal, Master of Puppets also demonstrated a marked improvement in the band’s songwriting (with lyrics by rhythm guitarist James Hetfield). And the jump from an indie label to market giant Elektra brought with it improved production values that would serve to sharpen the Metallica sound even further.

The next great leap forward was 1991’s Metallica (widely known as The Black Album). Easing back on the beats-per-minute allowed the music (and listeners) to breathe, and allowed more space for melody and lyrics to catch the ears of an audience well beyond the speed- and extreme metal scenes. A massive critical and commercial success, Metallica debuted at the number-one spot on album charts across the globe. And the record displayed remarkable staying power: its 635-week reign on the Billboard 200 chart is bested only by Pink Floyd, Bob Marley and fellow Bay Area band Journey.

And while Metallica’s music of those years was remarkable and greatly influential, it was the band’s lyrics that helped set the band apart from its contemporaries. In 2002 – by which time the band had settled into its role as a kind of elder-statesmen-of-metal role – Metallica’s music found itself the subject of a scholarly work. Craig Swanson was teaching sociology at North Central Michigan College when he completed his Master’s thesis, The Heavy Side of Metal: Metallica’s Counter-Hegemonic Trilogy.

Nearly two decades later, Swanson chuckles at the highfalutin title. “It’s more easy to explain it by calling it ‘counter-cultural’ rather than ‘counter-hegemonic,’” he says. But Swanson stands by the central idea of his thesis. “I focused on three albums: Ride the Lightning, Master of Puppets, and …And Justice for All,” he explains. “The lyrical content is scathing against contemporary society.”

Swanson emphasizes that while Hetfield and his band mates don’t present themselves as sociologists, Metallica’s music comments intelligently and incisively upon sociological themes. “And it’s a pretty thorough analysis,” Swanson believes. He notes that Metallica addresses themes of violence on three distinct levels: personal (e.g. suicide, as in “Fade to Black” from 1985’s Ride the Lightning), interpersonal, and institutional violence such as war (…And Justice for All’s “One,” for example).

Swanson notes that Metallica’s nuanced lyrics were a cut above what most other metal bands were churning out. “I’m an anarchist, and I’m pretty cool with some kind of political violence,” he says with a smile. “But a lot of metal is just ‘break shit.’” From Swanson’s perspective, Metallica pinpoints violence not as “an inherent biological thing in humans,” but rather as an institutional creation.

And Swanson believes that Metallica’s music serves an important function that extends well beyond entertainment. He cites the concept of predictive programming, “the idea that people can use music to shape society in ways that…aren’t wonderful.” He says that Metallica “runs completely counter to that by critiquing it.” And they go further with the musical component.