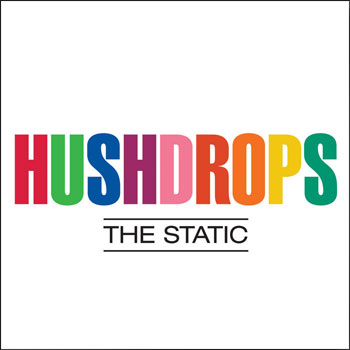 Hey, remember the ‘90s? No, not the hair metal-lite of the era, and not the flannel-wrapped grunge of the Pacific Northwest. Well, maybe a little of that. What I’m thinking of is the rise and codification of “alternative rock,” a loosely-defined but distinctive style that combined the best of power pop, hard rock and good old-fashioned rock and roll spirit.

Maybe you heard it in albums by Teenage Fanclub. Maybe you dug Evan Dando’s Lemonheads. Perhaps you dug Sugar, a band that combined a hardcore sensibility with ear candy melodies. Whatever. The thing is, it’s that era that immediately springs to mind when I listen to The Static, the third (and possibly final) album from Chicago-based band Hushdrops.

Hushdrops has all of the qualities to which I alluded in the previous paragraphs. And there’s a distinctive Chicago/Midwest vibe, one that places Hushdrops in the good sonic company of artists like Urge Overkill, Liz Phair and …you get the idea.

Sadly, Hushdrops drummer Joe Camarillo passed away suddenly just as the album’s finishing touches were being applied. But there’s nothing unfinished about The Static. Employing a remarkably spare set of tools, the group paints a sonic picture that’s deeply textured. The creamy backing vocals of “One of the Guys” blend seamlessly with the guitar/bass/drums arrangement. Subtle touches of electric sitar are woven into the mix, but done in a way that doesn’t render the song as a retro piece.

And when Hushdrops traffic in guitar riffage, it’s still wholly in service to the songs. Some bands craft songs as little more than vehicles for riffs or hooks, and that’s fine. But Hushdrops bring the tunes, and then add understated bits of filigree.

And the group displays impressive stylistic range within its chosen style. “The Lummox” opens with a lumbering arrangement that owes as much to Black Sabbath as anything else. But the tune shifts gears into something a bit shoegazier, with string synth taking the tune in a vaguely psychedelic direciton. And then the song shifts gears yet again. And again, and again. In the space of less than two minutes, Husdrops have created a miniature instro-prog epic.

And “Elevator” is a lush pop epic that somehow feels like Burt Bacharach updated for today (well, let’s say the 1990s.). And “Tomorrow Takes the Sun” sounds like the Yardbirds playing Rubber Soul outtakes.

It’s not at all clear if the group will be in a position to continue in the face of losing Camarillo. But whether they do or not, Hushdrops have brought forth a superb album in the form of The Static. If they stop here, it’s a loss for those who enjoy their music. But if The Static is the way they go out, it’s a triumphant finish.