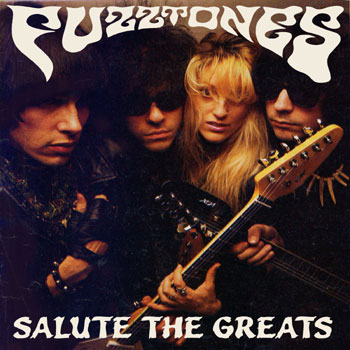 For decades now, The Fuzztones have been doing the important work of keeping the garage punk flame burning. Originally a New York City aggregation, the band led by Rudi Protrudi resettled in Germany many years ago, and there they remain. The band’s body of work is extensive, and in recent years has been appended by books and videos. But as far as the music itself, most every recorded track in the Fuzztones’ catalog can be placed into one of three categories.

There’s original songs written by the band, there are covers of garage classics (and deep-cut obscurities) and there are quite a number of grey-era tracks, songs cut not by the Fuzztones, but in tribute to them, as part of any number of compilations.

It’s that second category with which we concern ourselves today. Specifically, The Fuzztones have recently released a limited edition boxed st of 7” 45 r.p.m. singles – remember those? Sure ya do – with the title Fuzztones Salute the Greats. It’s a collection of tracks in which the Fuzztones themselves pay tribute to some of their heroes.

Some of these cuts are vintage recordings featuring previous lineups of the band (including keyboardist Deb O’Nair), while others are of more recent origin. Some are studio recordings, whie others are lo-fi (but quite listenable) live recordings. What all nine (more on that in a moment) tracks share is the Fuzztones aesthetic: they rock in snarling, greasy, roaring fashion.

Arthur Lee’s Love gets the tribute treatment by way of covers of “7 and 7 Is” and “My Flash On You.” The A-side opens unexpectedly with a wonderfully florid piano intro before getting down to business. The B-side sounds as if was recorded onstage in ‘66, with whatever portable equipment was available then. The audio is muddy but the band is on fire, and the drummer is especially impressive.

The Fugs were true punks, in philosophy if not in sound. For some reason, the A-side, a 2013 recording of “Group Group” originally featured on the Fuzztones’ album Salt for Zombies was not included in my review materials. But the B-side, a studio recording of “Skin Flowers” from 2020’s NYC album, is here. Imagine jug band folk crossed with punk and you’ll have an idea of how it sounds. Rudi Protrudi’s piano work is superb (he plays everything here except organ and drums). 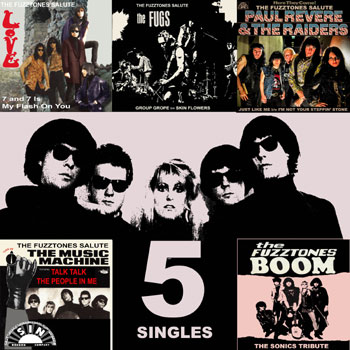 Under those tricorn hats and inside of those Revolutionary War-styled uniforms, Paul Revere and the Raiders rocked as hard as nails. They brought hard rock – yes, with a wrapping of bubblegum – to a generation of young listeners. Their work is honored here through two songs. “Just Like Me” sounds very much like the original, down to the smallest details, but it somehow rocks even harder than the original. If Mark Lindsay hears it, I daresay he’ll be impressed. The flip of that seven-inch is “(I’m Not Your) Steppin’ Stone,” because, y’know, the Raiders cut it before The Monkees.

(A quick aside, if I might. My dear friend Keith Allison recently passed away. He was quite ill in the weeks before his death, and I would like to think that his day was brightened just a bit when I told him about The Fuzztones’ cover of “Steppin’ Stone.” You see, while Keith didn’t officially join the Raiders until several years after they cut that song, he played on the original demo record by Boyce and Hart. And Drake Levin’s signature lick? That was copied from Keith’s B&H demo performance, which itself was based on The Rolling Stones’ “The Last Time.”)

The Music Machine are among the most underrated groups of the ‘60s. Sean Bonniwell’s voice and his approach to the music is inimitable. Well, not quite, because the Fuzztones imitate it quite well. The classic “Talk Talk” is remarkably difficult to play, but you’d never know it hearing the Fuzztones tackle the song. And the lo-fi “The People in Me” shines a light on a lesser-known (but equally great) tune.

In some ways, Pacific Northwest legends The Sonics might be the closest in spirit to what the The Fuzztones do today. Their uncompromising sound drew from hard-charging rhythm and blues, and they were punk before the term existed. The Fuzztones acknowledge their musical debt to The Sonics by way of covers of “Cinderella” and “Strychnine,” both of which recordings first appeared on the Fuzztones’ 1985 LP Lysergic Emanations.

It’s high time for some new original material from the band, but in the meantime, Fuzztones Salute the Greats is a tasty treat indeed.