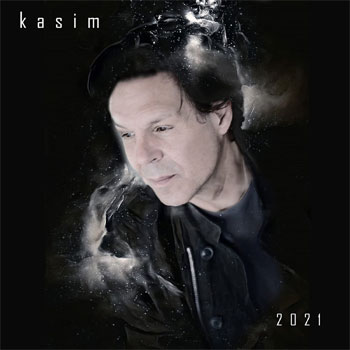 Though his list of musical credits is long and impressive – work with Cherry Vanilla, Meat Loaf, Joan Jett, Blue Öyster Cult and many others – if you know the name Kasim Sulton, it’s probably through his association with Todd Rundgren. A longtime member of the prog-to-new-wave-era quartet lineup of Utopia, Sulton sang lead on one of the group’s biggest hits, “Set Me Free.” He was also part of the reunion of a few years ago. And Kasim has been a part of Todd’s solo bands, on and off, for decades: I first saw him onstage as part of the A Cappella group onstage Thanksgiving 1985.

In his spare moments between working with and/or supporting other artists, Sulton has a solo career as well. Those other endeavors don’t leave him much downtime: he released a self-titled debut way back in 1982, and his latest, the pointedly-titled Kasim 2021, is his fourth solo release. (It’s his fifth if you count a hard to find self-released Live Bootleg from 2017.)

Though he played bass in Utopia, Sulton is a multi-instrumentalist. And on 2021 he covers all manner of instruments, along with associate and co-songwriter Phil Thornalley (The Cure, Johnny Hates Jazz).

Anyone who appreciates the Adventures in Utopia sound of Sulton’s old band will enjoy 2021. It draws upon the best qualities of that record; Sulton’s vocals were one of Utopia’s key assets, and his multi-tracked voice as used here is superbly effective. Forty years may have passed, but Sulton’s voice doesn’t sound a day older than it did in 1979.

The arrangement on 2021 don’t seem have aged beyond the Adventures era, and that’s a very good thing. Sulton’s keen melodic sense and straightforward, uncluttered production aesthetic serves these songs quite well. “Unsung” wouldn’t have been terribly out of place on Deface the Music. “Blame Somebody Else” features some interesting keyboard textures, chief among them some Mellotron flutes.

Utopia made a point of sharing composer credits, so it was often unclear the extent to which Sulton contributed to the songwriting. Thornalley is on record as being a major Todd fan, so that blurs things here as well. But the songs on 2021 are uniformly strong, and when they do sound like something other than Utopia – as on the very Fountains of Wayne-ish “Fastcar” – they’re still damn good.

Sulton explores a wide sonic palette: the electronic beats and textures of “What it Means to Be Alone” are expertly applied to a lovely, contemplative weeper. “Sweetest Fascination” is effectively a tribute to solo Todd; the song’s intro will fool you into thinking you’re hearing Mr. Rundgren, who does not in fact appear on the album.

If such things as power pop hit singles were still a thing, you’d be hearing “Everything I Shouldn’t Want” on your radio. And the swooning, ELO-ish ballad “Her Love is Sunshine” showcases all of Sulton’s myriad musical assets.

All but one of the album’s songs are original compositions; the closing track, a cover of Nick Lowe’s timeless “(What’s So Funny ‘Bout) Peace Love and Understanding” is a well-chosen, well-executed choice. Some catchy synth work (courtesy of reunion-era Utopia keys man Gil Assayas) and a searing lead guitar add up to the record’s rocking-est track. But start to finish, Kasim 2021 is a winner.

You may also enjoy…this feature based on my interview with Kasim (and Todd and Willie).