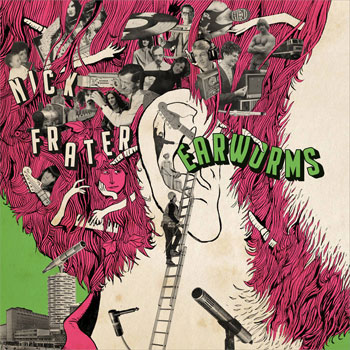 There’s an ineffable character that connects bands like Cheap Trick, Material Issue, The Raspberries, Matthew Sweet, Ben Folds and a select few others. Their various approaches to music may not share a plethora of specific, identifiable characteristics, but there’s something irresistible about their best work. It’s uplifting and breathtaking, and the act of listening to it quickens one’s pulse. The music is consistently accessible, relatable, and it isn’t dumbed-down.

You may or may not be familiar with the name Nick Frater. He’s not (yet) as well known as the aforementioned artists. But his work deserves to be mentioned in the same breath as theirs. He demonstrates a deep understanding of songcraft and musicianship. He knows the value of a good hook, a soaring chorus and a memorable lyric. And he applies his accumulated/earned knowledge to the appropriately-titled Earworms, a collection of songs destined to live in your head.

His chord progressions suggest that he’s spent a bit of time listening to Jeff Lynne, to The Beach Boys, to Badfinger, Owsley and Pilot. He never mimics any of those artists (nor any others, for that matter), but his songs have the same kind of positive, lasting effect as theirs. The songs blow by quickly, never overstaying their welcome. Frater digs right into the melody, doing most of the heavy lifting himself, aided by select collaborators/helpers here and there (including Jellyfish’s Roger Joseph Manning – a kindred spirit he – on one).

Earworms has but ten tracks. But here’s the thing: it doesn’t need more. Tunes like “What’s With Your Heavy Heart?” are so good that the quality negates the need for more. Most albums have at least a track or two that feel less than essential, a bit like filler. You won’t find any of those on Earworms. Most enthusiastically recommended, spending time with Nick Frater’s latest is a great way to usher in the new year. (I’ve reviewed at least four of his previous releases; they’re nearly as wonderful as this.)