Seth and Sara Brand didn’t start out as a musical duo. Before they got together, both lived lives far more conventional than the path upon which they’ve since embarked. But their current approach to life – perhaps best described as semi-nomadic – lends itself to the couple’s creative pursuits.

Seth Brand had been playing music as a solo performer in and around St. Louis, Missouri for several years before he met his future wife and collaborator. He says that he had only begun to take his music truly seriously in the year or so before they got together. 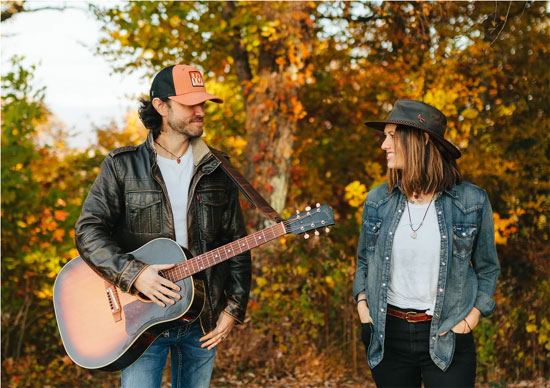 Sara was the manager of a coffee shop, and Seth was working as an audio engineer. They met when he stopped in for a cup of coffee. Before long, the couple fell in love, and by the time they married, Sara had long since gone all-in on supporting Seth’s music. “I wanted to book shows for him,” she says. “And we made a deal that if I could book him a tour, we would move closer to my family in North Carolina.” But they wouldn’t exactly settle down: their dreams included getting a van and hitting the road.

The idea of leaving a fairly comfortable life behind was an exciting prospect, but it was risky and more than a little intimidating. “I was living in a really nice loft in downtown St. Louis, right across from the Fox Theatre,” Seth says. He and Sara had accumulated two young lifetimes’ worth of “stuff,” and their plans of traveling light meant shedding most of their possessions. “It was really scary to watch it go,” Seth admits. “But when you’re chasing a dream, it’s also kind of exciting.”

Sara applied her business sense to the task and quickly lined up a packed month-long schedule of performance dates in the Carolinas. “It only took her two weeks to do it!” marvels Seth. They put in notices at their jobs and left St. Louis in September 2018. And Sara has continued her successful performance booking efforts nonstop ever since.

But once that first tour began, it was Seth who became the busy half of the couple. “And I didn’t want to just sit there,” Sara says with a laugh. “So I asked Seth to teach me something.” He taught her how to play a drum kit. “It took a second to figure it out,” Sara admits, laughing again. She confesses that she doesn’t like to practice, but with a fully booked performance calendar, it’s not really necessary; she quickly developed the chops needed to provide that steady percussion to accompany Seth’s guitar.

The set list changed over time, too. In the beginning, Seth was a solo performer singing and playing the songs he had written. But today he’s one-half of Seth and Sara, a guitar-and-drums singing duo. “Now Sara writes most of the lyrics,” he says, while he focuses more on the music side of composition. “That transition took about a year and a half,” Seth says.

Sara’s sweet voice find expression on “Cowboy Lullaby,” the opening track on the couple’s self-titled EP. “Where the Moonshine Lives” is a windswept country rocker featuring Seth’s lead vocal and a tasty full band arrangement. A lovely vocal duet, a cover of the John Prine/Iris Dement classic “In Spite of Ourselves” is another standout track on the five-song set released in August.

When the worst of the pandemic brought with it a near complete total cessation of live music, the couple hit the pause button on their never-ending tour. “We were down for two or three months,” Sara says. “That took away a tour we had planned out West. But by July [2020] we were up and running again.” Seth feels that he and Sara got lucky in avoiding the virus in part “because we move around so much.”

These days, Seth and Sara spend half of the year on the road, touring from show to show in their van. The rest of the time they’re based in Asheville, and they’re currently in the process of buying their first home.

Asked about the secret to their success at living as half-time nomads, Seth Brand provides a simple, practical answer. “We keep our bills very low,” he says. But going mobile comes with its own set of financial challenges. “We’ve been through four vans since we started!” he says.

“We spend literally 24/7 together,” Seth says. “And half of that time is in a van. So having that perfect match – and having a lot of patience and understanding – is critical.” Both agree that “neither one of us would be able to do this with anyone else.”