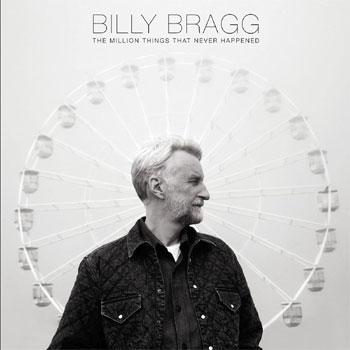 Let nearly 40 years pass, and some things are almost certain to change. If your exposure to Billy Bragg commenced with his 1983 debut Life’s a Riot with Spy vs Spy and its standout track “A New England” – and then you didn’t hear anything from him again until now, you’d be in for a bit of a shock. Though it would be covered in memorable, swoonworthy fashion by Kirsty MacColl, the original version of “A New England” is a spare folk-punk number, with the only sounds provided by a lone electric guitar and Bragg’s veddy streetwise British-accented voice.

Pop in The Million Things That Never Happened, Bragg’s 13th (if you count the two he did with Wilco) album, and you’ll hear something quite different. Gone are the punk trappings, and in their place is a fully formed, full-band aesthetic. And Bragg’s voice seems to have lost much of its British character; though hints or the accent surface here and there, for most of Million Things, Billy Bragg sounds like an American singer… singing Americana.

There are exceptions: “Good Days and Bad Days” feels much like the Bragg of old, with spare guitar work and a more readily identifiable British character. But hints of Carole King and mid-period Beatles filter in and out of the tune.

Pedal steel guitars dominate the album, as do softly swaying melodies. Bragg’s gift for memorable songwriting hasn’t left him, and that’s an important through-line that connects his new music with the sounds he was making in the early ‘80s.

There’s a wistful, seen-it-all character that permeates all twelve songs. Even the song titles telegraph that vibe. For example, “Reflections on the Mirth of Creativity,” “The Buck Doesn’t Stop Here No More.” But dogged, hard-won optimism figures nearly as prominently. The Million Things That Never Happened is a close, intimate listening experience, and if in fact you have missed Bragg’s work these last many years, his latest album is a fine re-entry point.