Album Review: The Wonderful World of Louis Armstrong All Stars – A Gift to Pops 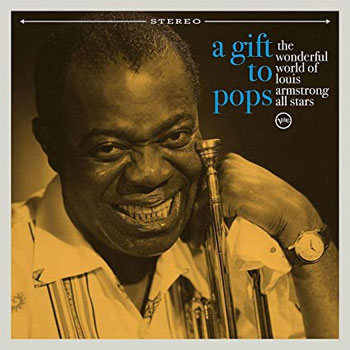 People of a certain age (i.e. my age) may have early memories of Louis Armstrong singing “Hello, Dolly,” “Wonderful World” or the theme song from On Her Majesty’s Secret Service, “We Have All the Time in the World.” Of course we (and most everyone else) know that Armstrong’s career had been through several phases by that time. His early work with his Hot Fives and similar outfits helped form the foundations of jazz. Born nearly 120 years ago (and gone since 1971) his influence cast a long shadow upon music of the 20th century and beyond.

A collective of New Orleans musicians led by Wycliffe Gordon pays tribute to Pops (aka Satchmo) on this new collection. Opening with a vintage recording of the man himself singing “When It’s Sleepy Time Down South” live onstage in 1964 – in stunning fidelity, it should be noted – the album then moves into new recordings.

These songs – exploring Armstrong’s varied catalog – strike a nice balance between faithful readings of the tunes and modern-day approaches to the material, always honoring the songs and their place in Armstrong’s body of work.

It’s not all hot jazz, either. While cuts like “Struttin’ With Some Barbecue” have that ineffable Crescent City flavor, tracks like “Up a Lazy River” are more relaxed. Drummer/vocalist Herlin Riley does an uncanny vocal simulation of Louis.

Compositions by Hoagy Carmichael, W.C. Handy, Oscar Hammerstein (and Louis himself) provide a tidy survey of the breadth of the music that has become associated with Armstrong. Piano, vocal and trumpet are all that are needed for a rousing “Rockin’ Chair.” And the All Stars’ reading of “St. Louis Blues” sounds and feels the way this reviewer imagines Vince Guaraldi might’ve tackled it.

Listening today in 2021, Sam Theard’s 1929 “I’ll Be Glad When You’re Dead” doesn’t sound all that far removed from the kind of thing another Louis (Jordan) was doing, and of course that led in fairly short order to rock’n’roll. See? It really is all connected.

The set ends with another brief Armstrong clip. It’s not music; instead it’s a lovey interview clip thin which Pops expresses his philosophy of life. It’s one we could all do well to share.