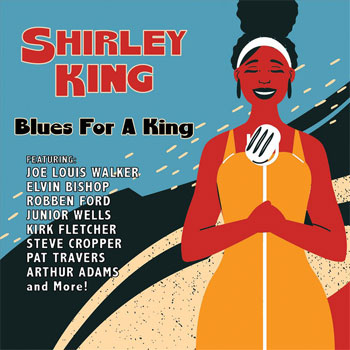 Shirley King says that her father made a point of providing opportunities for her to come and see him perform whenever he had a gig close to home. “He bought his middle sister a car so she could make sure I would come to some of the shows, and he made sure I was always dressed really pretty,” she recalls. “My dad was a good dad. I don’t know how he was able to do both [being a father and a touring musician]. But he did them both very well.”

Being the daughter of B.B. King meant that a young Shirley King often met other musical giants. “I would see my dad at some of these shows, and he wasn’t [always] on stages with blues people,” she says. “He was on stage with people like James Brown, Jackie Wilson and Sam Cooke, more Southern R&B soul singers.”

But when she was just 13, Shirley got to meet blues royalty. “When I was seeing the shows, there would always be just men on there,” she says. “It was like, ‘Is this a man’s world or what?’ I started asking myself, ‘Are women supposed to do this?’” Yet at one of the shows, there was a female performer: Etta James. Shirley recalls that moment vividly: “Oh, my God, when she walked out on stage, I was like, ‘I want this. I want to be like her!’ She was beautiful; she looked like a black Marilyn Monroe. This woman was gorgeous.”

And when James opened up her mouth to sing, young Shirley was completely won over. “I just knew that was my angel that I wanted to be like when I grew up,” she says. “I was impressed already with singing and show business, but I never really got the bug until I saw Etta James.”

Those kind of experiences dotted Shirley’s life as she grew toward adulthood. But she remembers a stinging lesson her father taught her onstage, one that brought her down a peg. “I went onstage with him one time,” she recalls with a wince. “He was playing Lucille. I got excited and [told the crowd], ‘Stand up! Clap your hands!’ He stopped playing and looked upside my head like, ‘What are you doing?’”

Once the show was over, B.B. King looked his daughter right in the eyes and said, “Honey, let me tell you one thing: Don’t ever do that again. When somebody invites you on their stage – whether it’s me or anybody else – be polite, go out there and take your time and mellow in to what’s going on. Because it’s their show, not your show.”

Shirley King took that lesson to heart. And she feels that she learned quite a bit from her father. And she says that in his final years, she got closer to him, helping him in any way she could. “But I didn’t run to try to do things,” she says. “Because I wanted my father get all his limelight. He worked so hard for that, and he loved it. He loved being on that stage, talking and singing and playing and making people happy.”

She says that when B.B. King became too ill to perform, it caused him great sadness. “He knew it had come to an end for him,” she says. “I saw that with my own eyes. So, I plan to work hard the rest of my time here on Earth, so my daddy will be happy with me even though he’s gone. I want him to just be proud that everything he told me to do, I tried to do it.”

Shirley is protective of her late father’s legacy, and she has little good to say about the documentary B.B. King: Life of Riley, made when her father was still living (and with his cooperation). “They got a bunch of entertainers on there with him,” she says. “But to tell B.B. King’s real story, it couldn’t have come from other superstars. It would have had to come from somebody that knew B.B. King before he became famous.” Nonetheless, she says she did help with promoting the film. “You know why? Because my daddy did it.”

Still, in part as a response to what she saw as that inaccurate portrayal, she eventually took her own initiative. Co-written with writer Dave Smitherman, Shirley King’s book Love is King was published in 2017, two years after her father’s passing. She says that the book was part of her effort to set the record straight in the wake of B.B. King’s death. “It was so much negativity going on when my father got sick,” she says. “Mostly family and people suing and all that. And things had started to be said about my father – by people that he had trusted to work with him – making him look like not a good guy.”

While she doesn’t mention anyone by name, King says that “for some of [his] other kids, it was about money. People wanted money.” And she says that some of those people told their stories on television. “I had been on TV,” she notes. “So I didn’t need to degrade my daddy to get 15 minutes of fame on TV.”

Still, Shirley says that the experience of publishing Love is King was ultimately an unhappy one. “The people who got me to do that book, they are not paying me for it,” she says. “So it’s looking like I’m gonna have to get a lawyer.” Meanwhile, she is already planning another book. “I’m fixing to write it and call it Me and B.B. King: Blues All Around Us,” she teases. “Because we know our natural facts.”

King is much happier when she’s focused on her singing career. And she’s already looking forward to a time, post-pandemic, when she can get back onstage. “I’m thinking that when this thing breaks down, Joe Louis Walker is probably gonna want me to be involved in some of the stuff he already got set up that got canceled.” And in the meantime, she’s happy to field interview requests that come her way. “The Canada, UK and overseas, people are reaching out to me left and right,” she says with a mixture of pride and wonderment. “What I’m trying to do here is make my father proud of me. And it’s just been an amazing ride.”