Being the daughter of a music legend brings with it great responsibility, especially if one chooses to follow a similar career path. And though her own journey is distinctly different from that of her father, Shirley King eventually settled into a life as a blues singer. And though her music is different from that of her famous dad, she knows that every move she makes is cast in the shadow of B.B. King.

King released her latest album, Blues for a King, in June 2020. The album draws from across the musical landscape for material. In addition to Child Ballad (by way of Led Zeppelin) “Gallows Pole” and Arthur Crudup’s “That’s All Right Mama,” King’s record features readings of unlikely tunes such as Blind Faith’s “Can’t Find My Way Home” and Traffic’s “Feelin’ Alright.” She admits that she was unfamiliar with some of the songs she was tasked with recording. 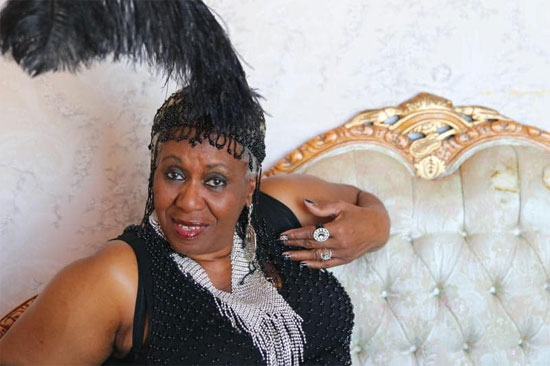 But whether the material selected for her was familiar or not, King’s goal was to bring her unique set of talents to each song. “I don’t think nobody should have sung Etta James’ ‘At Last’ but Etta James,” she admits. “Doing that song was an honor, but it wasn’t something that I would have chosen for myself. I was so intimidated, but I had to just remember: ‘This isn’t me trying to sing like Etta James; this is me delivering from my soul.’”

And the musician lineup on Blues for a King is as eclectic as the cast of characters: the album features a who’s-who list of guitarists from blues and beyond, including Kirk Fletcher, Duke Robillard, Elvin Bishop, Harvey Mandel, Robben Ford and Jethro Tull’s Martin Barre. King laughs as she explains. “Everybody that has interviewed me, the first question they ask is, ‘How did you get these top guitar players on your CD?’” She pauses and says she has to be honest.

“I had nothing to do with none of that,” King admits. “They sent me a track, and I sung on it. The guitar players that played, I’ve never met them. I never met anybody at Cleopatra Records,” she says, while making sure to note that the label is “working to make me famous now.”

And King is pleased with how the label’s efforts are going. “It’s sure worked good for me,” she says. “I think the world has changed for me from being B.B. King’s daughter, ‘What’s-her-name’ to Shirley King, the rock star. My head is getting so big, I almost got to get a wheel barrow to carry it around places!” But King seems a bit less interested in the album than in live performance. She hopes that the publicity around Blues for a King translates into people coming to see her onstage. “I hope the rock people gonna be coming to see Shirley King, because she played with some of their favorite idols,” she says.

King believes that association with mainstream (read: non-blues) artists was key to her father breaking through to a wider audience. “When my dad was just regular B.B. King, he was famous, but not world famous,” she explains. “But when he started going on stages with Eric Clapton, Jeff Beck, the Rolling Stones and U2, it just blew him up.” She hopes that having current-day guitar heroes like Fletcher and Walker on her album will open her up to more listeners.

Easily the oddest – and least expected – pairing on Shirley King’s latest release takes place on “Hoodoo Man,” a track featuring Junior Wells. The celebrated blues harp player died 23 years ago, but that detail doesn’t keep him from appearing on Blues for a King. Wells’ harmonica playing from an undated session is now part of a finished recording on King’s release. The singer explains that Junior Wells’ posthumous participation came as a result of another deceased musician being unavailable.

Cleopatra Records “wanted to use my dad,” King explains. “But because people are still suing my dad[‘s estate], they weren’t allowed to. I believe they might own some part of that song.” She is especially proud that the resulting recording of “Hoodoo Man Blues” is on her new record. “I’m so honored, because that song is gonna be the song of the tour that I’ll get a chance to play with my dad’s best friend, Mr. Joe Louis Walker.”

Walker is a longtime friend of the King family. “He was the only famous guitar player that called me and asked me how I was doing when my dad died,” King says. “We will be doing some stuff together, and he already is counting up the days when we can go out here and tour together. For him to [appear on] two songs on my album, I think it was God’s way of letting me know, ‘This is your father’s friend that wants to be there for you and help you.’”
Interviewed at a time when the globe remains in the throes of a deadly pandemic, King remains upbeat. “In this bad time when everything is not looking good, it’s looking great for me,” she says. “I’ve been in singing for 30 years, and I danced for 21 years. So, I’ve been 50 years in the business, and this is the first time I’ve gotten this much respect.”

King got her start in front of a crowd when she was quite young. “When I was in school, I was in plays. When I was at church I got in the choir,” she says. “Not only that, but I had been around enough show business people – comedians, everything – so I’d know how to throw a little comedy into what I do. So, all those things came together for me in the end; I just found a way to use everything I learned.”

But it would be dancing – not singing – that truly launched Shirley King’s life in show business. Starting in 1969 she led a successful two-decade career in Chicago as an in-demand dancer, part of a revue that would typically also include a comedian and a headlining music act.

King’s dancing prowess earned her a spot in Rudy Ray Moore’s 1976 action/comedy film The Human Tornado. Her racy performance brought greater notoriety, but she was initially concerned her father would be embarrassed or upset. “I said, ‘Daddy, I thought you was gonna be made because I was on there,’” she recalls. But her father laughed and replied, “What are you ashamed of? You was in a motion movie with Rudy!”