In California of the 1960s, a style of music known as Chicano soul (sometimes referred to as brown-eyed soul – took hold among listeners. Groups like Cannibal & the Headhunters (“Land of a Thousand Dances”) and Thee Midniters (“Whittier Boulevard”) thrilled audiences and achieved some measure of national success. But as prevailing styles came and went, Chicano soul seemed to disappear into history. Yet for lovers of the style like San Jose resident J.M. Valle, Chicano soul never went away. And thanks in great part to his efforts, the genre is enjoying a spirited resurgence, with current-day acts like Thee Baby Cuffs.

Valle doesn’t shy away for taking a bit of credit where it’s due. “I’m basically one of the pioneers of the current explosion of the soul scene,” he says. “The thing that’s going on right now is probably as big as it’s ever been.” A decade ago, Valle co-hosted Block 2 Block Radio with David Madrid on 91.5 FM KKUP-FM. “We played music and interviewed artists,” he says. That helped keep the music alive, bringing it to a new generation of listeners. 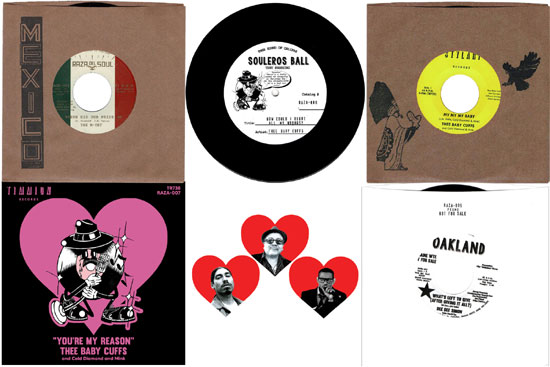 Today, the popularity of classic American soul has extended as far as Finland, home to Timmion Records, a label focusing on soul and funk. But Valle had noticed that curated record labels like Daptone and Numero Group were starting to focus on the Chicano market. “My thought was, ‘As Chicanos, why don’t we not just be marketed to as the customers? We can be the artists and even the label owners!’” Connecting with that passion and building upon the genre’s renewed popularity, Valle launched a record label of his own, Raza del Soul, in 2014.

Valle describes his original vision for the label. “I thought, ‘If I’m able to connect [labels like] Timmion with the low-rider community, record collectors and the people who go to the Super Love Jams,’” he says, “’then sure enough, something’s bound to happen!’”

Starting as an online record shop selling new pressings of classic soul 45s, Raza del Soul has grown quickly in popularity. And all the while, Valle has been encouraging the modern-day revival of Chicano soul, especially in San Jose. “I just kept on pushing it, pushing it, pushing it,” he says. “Eventually it exploded on its own, with little to no influence from me.”

In its early days, Raza del Soul concentrated on collaborative projects. “I would buy records wholesale, and then do exclusive limited runs of somebody else’s record, but with a special sleeve with artwork on it,” Valle says. “That’s how I got started. But then I got these guys together as Thee Baby Cuffs.”

Everything about Thee Baby Cuffs’ sound suggests the music was waxed sometime between 1965 and ‘72. Joe Narvaez is the harmony vocal trio’s lead singer. “I grew up with that kind of music,” he says. “Because I’m an older dude, I was there. And I guess that’s where the authenticity comes from.” Gilberto Rodriguez is the trio’s second lead, handling Spanish-language vocals. Reality Jonez sings the falsetto parts.

Valle’s guiding hand as songwriter and producer helps with that authenticity, too. “We do it old school,” he says. “We record on tape, and we release the music on records. There’s no Autotune or anything like that.” And he gives plenty of credit to the singers and musicians as well. “The stories are real,” Valle says. “They’re singing straight from the heart. And I think that’s what people are in need of right now.”

Backed by San Francisco-based instrumental soul group The M-Tet, Thee Baby Cuffs’ debut, “Where Did Our Pride Go?” was pressed in a run of 500 singles. The record sold out within four months. “They go for about $60 online now,” Valle says with a laugh. The group’s follow-up singles (“My My My Baby” and “You’re My Reason”) feature Thee Baby Cuffs backed by Finnish soul powerhouse instrumental outfit Cold Diamond & Mink.

J.M. Valle’s plan to keep bringing Chicano soul to today’s listeners involves a slow and steady approach; to date Raza del Soul has released five titles. But a sixth, Thee Baby Cuffs’ psychedelic soul-flavored “How Could I Right All My Wrongs” is due – on a vinyl 45, of course – by Christmas. “We’ve got some good stuff coming out,” says Valle.