The Barbershop Harmony Tradition Lives on in Western N.C.

Barbershop harmony is a quintessentially American musical form. Though its heyday was nearly a century ago, its popularity endures. Today there are at least 30 quartets in the Carolinas District of the Barbershop Harmony Society. Those groups perform far and wide, and there’s also a competitive element. This year’s Fall Festival took place November 11-13 in Hendersonville, and groups from all over the Carolinas were set to bring their best.

When most people think of barbershop music, they tend of conjure a mental image of four white men, wearing matching outfits and singing close harmony. The truth is a great deal more varied and nuanced. First of all, while barbershop music is always based on four-part harmony, chorus groups are as popular and widespread as quartets. And in the last several decades, female and mixed singing groups have grown in number. 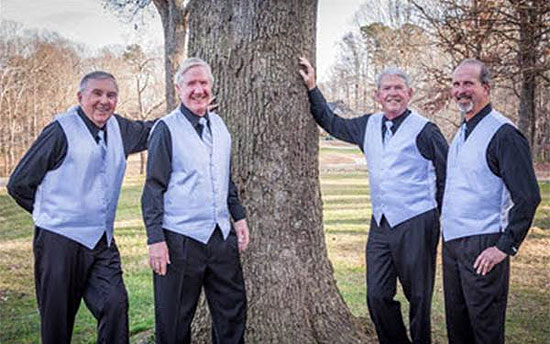 Never Home 4, one of many barbershop quartets in North Carolina. Warren Fuson is third from left.

Barbershop singing is very popular in Western North Carolina; Steve Anderson, local president of the Barbershop Harmony Society notes that the Asheville chapter has been in existence for over 70 years. “Te social aspect of barbershopping, along with a strong sense of teamwork, also adds to the popularity of singing with a barbershop chapter,” he says.

And barbershop’s true cultural roots are often overlooked or forgotten. In fact, says Warren Fuson, the chapter’s VP of judging, “the music itself is 100% out of the African-American musical community of the 1800s.” He notes that jazz greats like Scott Joplin, The Mills Brothers and Louis Armstrong all sang in barbershop quartets in their pre-fame days. Fuson and his wife created an educational program to correct the record and celebrate the form. Launched in 2019 at NC Central University, their “Barbershop Revival” program brings barbershop harmony back into the Black community.

And among those who are already deeply immersed in barbershop, there’s a lively scene. Part of that is because it’s a very welcoming and accessible form. “The vast majority of our singers have virtually no musical education,” Fuson says. And he estimates that about half can’t even read musical notation.

But they learn by doing, encouraged by their more experienced fellow singers. While the most versatile vocalists switch around, a typical barbershop harmony singer focuses on one of the four vocal parts: lead, tenor, baritone or bass. The groups hone their skills (and expand their repertoire) by singing “tags,” known formally as codas.

Tags are typically the musical high point of songs in the barbershop repertoire, and the quartets typically learn new ones in a manner of minutes. “At a convention or contest,” Fuson notes, “you’ll end up in a hallway or stairwell with three other guys, singing tags for an hour or more.” The sharing and learning of tags is one of many ways that barbershop harmony shares roots with other oral traditions like storytelling.

A great deal of barbershop music comes from popular show tunes and songs from the 1890s to the 1910s. But Fuson emphasizes that barbershopping is a living tradition, and more modern works have become popular parts of the repertoire. Go see and hear a quartet or chorus and you’re likely to hear songs by John Denver, Billy Joel, The Beatles, and even Queen’s “Bohemian Rhapsody” arranged for four-part a cappella singing.

Because of pandemic-related safety measures, this year’s festival and competition will be different from previous events. But Fuson says that his organization is making every effort to present as “normal” a competition as is possible while looking after the health and safety of everyone involved. “We would all like to be able to sing together with no masks,” he says, “But you have to be careful.”

The annual competitions – featuring both quartets and larger choruses – are as exciting as they are tuneful. Winning groups earn a highly-coveted trophy. “They get to keep it for a year,” Fuson says. “Then, if somebody else wins, they pass it on.” He expects about a dozen quartets will compete this year. “I had to wait until I was 72 years old to win a district quartet contest,” he says.

It turns out that there’s a scientific basis for the feel-good effects of barbershop singing. Steve Anderson says that “in addition to stimulating endorphins, harmony singing enhances the [natural] production of oxytocin, a hormone which powerfully influences a sense of connectedness among people.”

So while there’s a spirit of competition at barbershop singing contests, it’s primarily about fun and fellowship. “When you’re on stage,” Fuson says, “the vast majority of people in the audience are also singers. And they’re your cheering section!”