Concert posters and album art make up a significant portion of local artist Joshua Marc Levy’s commissioned work. So when COVID-19 led to the widespread cancellation of tours and local shows, he experienced firsthand the financial strain the industry was under. “I was thinking intuitively that [the pandemic] might bring a longer break,” he recalls. “And when I started talking to artists, I realized some of them were moving away from [the creative sector].”

In an effort to celebrate and encourage his network of colleagues and friends, Levy proposed a challenge of sorts. Over the course of the last year, 14 North Carolina-based artists were asked to create an original piece as if it was the last work they’d ever make. “I told them to pretend like it was their ‘desert island’ paining, picture or poster,” he recalls. The result is The Last Rock & Roll Art Show. Hosted by Push Skate Shop and Gallery in Asheville, N.C., the collection opened Friday, Nov. 12 and runs through Tuesday, Jan. 2. 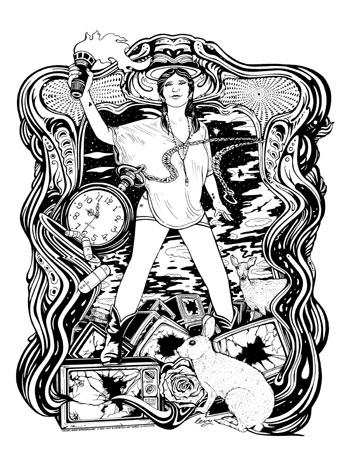 Among the group’s participants is Ken Vallario. A self-described artist/philosopher, Vallario began his career as a working artist in 1996. He creates museum quality paintings that often focus on the human form, science and psychology. Even art novitiates are likely to spot the influence of surrealist Salvador Dalí in his richly detailed, dreamlike pieces. Despite his work not being tied specifically to the music industry, Levy says he reached out to Vallario because the painter’s style feels “very rock ’n’ roll to me.”

Levy also credits Vallario for inspiring the exhibit’s title. When the two first discussed Levy’s proposed group show, Vallario had already announced his decision to close his River Arts District studio after four years in Wedge Studios. Though he would remain active as an artist, Vallario’s video announcement on social media signaled a change in direction. According to Levy, Vallario told him he’d still like to participate, but declared, “It will be the last one.”

Despite the somber source of inspiration, Levy says that the show’s title is an optimistic homage to other last-but-not-really-last endeavors. He laughs and suggests that in art, as with popular music, “There’s always a sequel. How many times has KISS retired? They always come back!”

But the exhibit’s name also underscores the financial vulnerability local creatives often face, especially amid a pandemic. According to this year’s Asheville Area Arts Council arts impact survey, Buncombe County’s creative sector reported a loss of over $23 million between March 2020-February 2021. “The arts scene has really suffered over this period,” Levy says.

The majority of the show’s participants are known for their visual contributions within arts and music communities. But a few are more directly tied to the latter, including Statesville musician Matt Walsh. “While I’m not known for my paintings, I’ve been drawing and painting since I was a kid,” he explains. He says his work for upcoming exhibit displays his longtime fascination with werewolves.

But unlike Levy, Walsh doesn’t believe that local artists have it tough economically. Noting that 2020 was among his most financially successful years ever, he asserts that many artists and musicians “have used the pandemic as an excuse for their lack of output, which doesn’t make sense considering we’ve had a lot of time off to create.”

Other artists acknowledge the challenges brought on by the pandemic, and their art reflects those realities. Vallario describes his featured piece, “2020 Vision,” as “a conscious meditation on mortality, a memento mori.” He says that in the early days of COVID-19 he realized that pandemic-related stress would bring about societal transformation. “I wanted to make a painting to mark time,” he says.

Stuart Engel sold his first piece at age 12. In recent years his works have been displayed at Woolworth Art Walk, The Warren Haynes Official Xmas Jam Art Show and (until Covid hit) at ZaPow! Gallery. For the show that Levy’s curating, Engel has created multiple works. “They’re very deep,” he says. “Each individual viewer will experience them differently.” 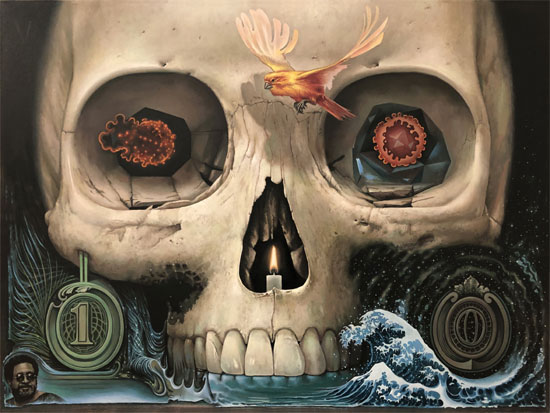 The group of artists, notes Levy, are as varied as their works. “Half of them work in the music industry, and half don’t,” he explains. “What bridges them is that they’re all local North Carolina artists, and they’ve all been here for at least a decade.”

While none of the featured artists has officially announced an exit from the creative sphere, the “Last” tag in Levy’s promotion of the event serves as a reminder to those who appreciate the arts that they should channel that appreciation into tangible support. In addition to the many works hanging on display, most of the featured artists will have art prints available for purchase.

Levy adds that he hopes those who view the show come away inspired to create art of their own. “It’s going to be mind blowing,” he promises. And despite the exhibit’s title, he is confident a follow-up will take place. Granted, he says, “it might be a few years before the next one.”

A substantially edited version of this featured appeared previously in Mountain Xpress.