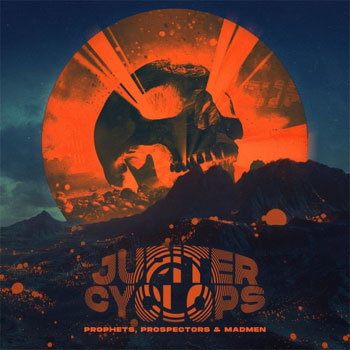 This swaggering Phoenix metal outfit swings for the fences on its debut release. With guitar pyrotechnics woven into a band aesthetic that focuses on ensemble playing, Jupiter cyclops delivers the punch of metal but with an uncommon degree of nuance. As one would expect – demand, really – of this kind of music, the riffs are uber-heavy. They’re catchy in a way that stays with you after the music’s over, but never clichéd nor overwrought. The occasional pig-squeal guitar lick adds to the appeal rather than overwhelming the sound.

And there’s a degree of swing that isn’t always found in metal. The album’s opening cut, “Down from the Inside” has that swing in massive quantities. The song’s vibe gets across the feeling that, yeah, these guys are serious and really mean it, but they’re also having fun in the process. “Chemical Voodoo” heads in a more conventionally doom/stoner direction (with a hint of blues), and some whip-smart bass work makes sure that the band steers clear of the sludgy tar pits. And the lead vocals – supported by tight-harmony overdubs – are a cut or three above standard-issue metal.

The nuclear blast of tracks like “Last of Life” delivers power and melody, and suggests that the band has managed the tricky feat of keeping itself firmly planted in the present while displaying an understanding of the qualities that made bands like Iron Maiden and Deep Purple so successful at their game.

The album’s standout track, “SMBR” gathers together all of Jupiter Cyclops’ many strengths into a single track. The song is built around a pounding riff, but it’s more than simply a vehicle for flashy guitar work. The mind-meld between guitar and bass is stunning, and the high-wire solo complements nicely with the assured vocal work. Recommended. https://jupitercyclops.bandcamp.com/