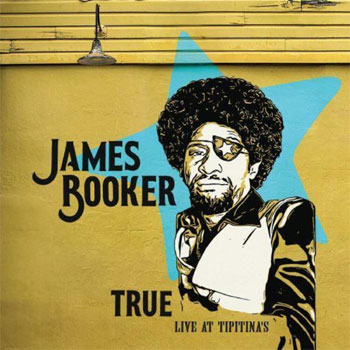 Though he passed at age 43, New Orleans pianist James Booker earned quite a reputation during his lifetime. The self-anointed Piano Prince of New Orleans had his own brand of r&b-meets-jazz, and counted Dr. John and Harry Connick Jr. among his admirers.

Booker’s early career as a musician focused primarily upon live performance, with a few singles released in the ‘50s and 1960s; his debut album wouldn’t appear until 1974. Throughout the middle ‘70s he toured extensively in Europe, and by his return to the U.S. in 1978, he was less well-known than he had been.

But his fire still burned brightly, and New Orleans audiences reacted in kind. Many of his live performances – often in bars and tiny clubs – were recorded. One of his regular gigs in that period was at New Orleans’ Maple Leaf Bar, but he also played at Tipitina’s in the city’s Uptown. One of those shows, an April 1978 date, was captured on tape.

The new album is sourced from house recordings of Booker’s three sets from that night. The nine cuts on True are a mix of originals and standards. “One Helluva Nerve” and “Slowly But Surely” had been featured on Booker’s 1977 LP The Piano Prince of New Orleans. Another classic-sounding original, “Wake Up Mr. Moon Man” would appear – from a live date in Germany – on the 1980 live LP Blues & Ragtime from New Orleans.

The standards include familiar tunes (“Malaguena,” a flowery, dramatic and classically-tinged reading of “A Taste of Honey,” George Harrison’s Beatles-era classic “Something” and more), each recast into Booker’s energetic and inimitable style. He’s in spirited voice, pounding out a lively rhythm delivering rollicking solo breaks and generally projecting his larger-than-life persona into the ears of the gathered patrons at Tipitina’s.

In Sonny Schneidau’s liner note essay – printed on a 12×12 insert inside the record sleeve – he self-effacingly emphasizes that his words are “not meant to be a biography” (he makes recommendations on that score). But his firsthand memories of seeing Booker onstage illuminate his writing. And Schneidau himself was the live sound technician for those shows, so listeners have him to thank for the sparking fidelity of this recording.

Tipitina’s Record Club is a new subscription service offering limited-edition, vinyl-only releases of previously-unheard recordings from the legendary New Orleans music venue. Preceded by releases of music by The Radiators and Professor Longhair and a reissue of Galactic’s debut album, True: Live at Tipitina’s, April 25, 1978 is the fourth album in the ongoing, semimonthly series. Tipitina’s Record Club releases are not available on CD, though some titles will be made available in digital format. And the vinyl records – often color, like the aqua swirl of James Booker’s True – won’t be solid in retail stores.