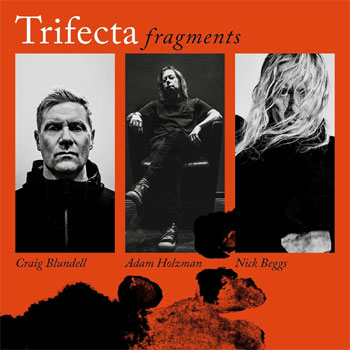 Here’s an easy trivia question for you: What do Craig Blundell, Adam asnd Nick Beggs have in common?

It’s really a trick question, because the judges will allow any number of possible answers. You might have replied that (a) all three men are superb musicians playing progressive rock, or (b) all three are members of Steven Wilson’s band (which overlaps nearly with the first answer). But now there’s another answer: collectively, they make up a new trio called Trifecta.

Fragments is their new album, and while it’s rooted in prog, the music has at least (if not more) to do with jazz fusion. The disc features fifteen tracks, and – astoundingly for music in this category – only one cut exceeds the four-minute mark.

The music is knotty, mostly instrumental stuff, with hints of everything from Allan Holdsworth to Brand X. It’s as ambitious and exploratory as music can be while still maintain any kind of accessibility. And while the tracks are instrumental, the titles get across the notion that – their stern album cover countenances aside – this trio is a playful, wacky bunch. How else to explain titles like “The Enigma of Mr Fripp,” “Nightmare in Shining Armor” and “Clean Up on Aisle Five”?

The titles aren’t random silliness; they do provide clues as to where a particular number might go. “The Mute Gospel” does indeed have a gospel vibe, though it’s more likely to get you thinking about Geirge Duke and Fran Zappa doing “Uncle Remus” than any churchified, sanctified songs of praise. “Sally Doo Dally” comes as close to pop as anything on the set, and it’s closer than you might expect.

And the aforementioned track referencing the King King Crimson man does in fact sounds a lit like Fripp, though it executes the hairpin turns on keyboards more than guitar. In fact guitars aren’t the primary instruments on Fragments. Blundell handles percussion and electronics; Beggs plays basses, Chapman Stick, keys and guitars; Holzman is on key and (as the notes tell us) “Low Rent Hairdo.”

“Pavlov’s Dog Killed Schrodinger’s Cat” is low-key weirdness, with a rare Beggs vocal tun. “Dry Martini” is reminiscent of Another Green World-era Eno. “Lie 2 Me and Take My Money” is out-there fusion, with sounds that suggest a violin being, um, violated. Great stuff. And “Hold it Like That” suggests that Trifecta could have al ucrative career in movie theme and/or soundtrack work, should they choose.

These three are busy all the time, so while the imminent return of Porcupine Tree may mean that their work with Wilson is on hold for a bit, what Holzman, Beggs and Blundell have brought forth with Trifecta is a tasty treat for right here, right now.