Album Review: The Weeklings — In Their Own Write 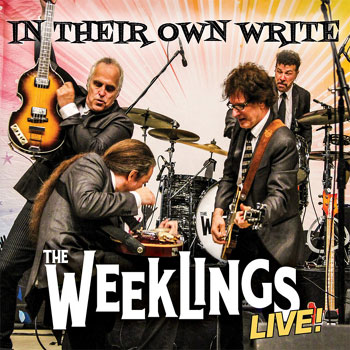 Had The Weeklings never done anything beyond the perfect Beatles pastiche of “Little Tease,” they wold be worthy of note and praise. But they have done more, and its all worth of further investigation. Listening to those studio recordings, I had strong suspicions that they’d be delightful to experience live onstage.

Riffing on a John Lennon book of poetry for its title, The Weeklings’ In Their Own Write presents the foursome in concert. They open with the aforementioned “Little Tease,” and the fun and energy never let up. “I Want You Again” is less Beatle-y (though it references the fabs’ first movie) and leans more in a classic power pop direction. They can rock out, as the do on “3” and toward the end of “April’s Fool,” but they never dial down the ear candy quotient in the process.

Most of the songs on this 15-track set are Weeklings originals that showcase the band’s mastery of their chosen form. The production and musicianship are first-rate, and the vocals (leads and harmonies) are beyond superb. And a carefully-chosen trio of covers tells us even more about the group and where its collective heart lies. The group delivers a reading of The Beatles’ The Word” that is close to – yet somehow betters – the studio recording, included on the various-artists Jem Records Celebrates John Lennon.

A cover of the theme song from That Thing You Do! is reverent to the point where it wouldn’t be worth putting on an album, but seeing as In Their Own Write is the document of a live show, it make sense. And “Baby You’re a Rich Man” is a pretty left-field choice of Beatles covers; The Weeklings don’t reinvent the tune, but they have some fun with it, and the lead guitar fills are impressive in approximating the sound of a guitar being played backwards (you know what I mean).

In Their Own Write delivers what a live album should.