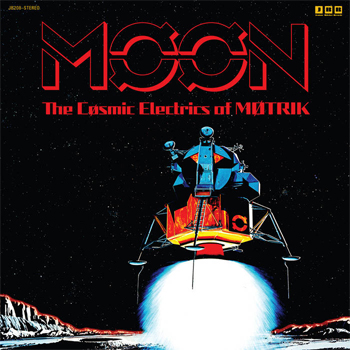 Acknowledging that krautrock is in fact little more than a catch-all term for a wide variety of styles that come (primarily) out of very late ‘60s to mid ‘70s West Germany, I’ll note that for many listeners (or comparatively many, as krautrock isn’t widely known) the label refers to the guitar-based uber-beat motorik approach of bands like Neu! and Harmonia.

And it’s from those that a current-day group called Møtrik draws much of its inspiration. But there are some important differences. The basic music does indeed pummel along relentlessly a la Neu! But there’s more going on. The whisper-vocals of Erik Golts are reminiscent in places of Marc Bolan. And the washes of analog synthesizer give the music a vibe that straddles classic motorik krautrock and Album-era Public Image Limited.

In fact, the arsenal of vintage and modern synthesizers employed by Dave Fulton and Cord Amato is a key to providing a rich and intriguing aural landscape. Songs like “Particle Maze” lean more in a pop song direction than one might expect from a group that allies its approach so closely with that of Dinger und Rother.

As it is, Moon: The Cosmic Electrics of Møtrik has variety as its chief characteristic of note. Lovers of krautrock will luxuriate in the relentless pulsating music, but those who insist that music has to explicitly go someplace (and be clear that it’s doing so) will find Moon more than satisfying. This quartet of musicians from Portland Oregon (you thought maybe Stuttgart?) demonstrate that four decades after its heyday, krautrock is as alive and alluring as ever.