If you read Musoscribe with anything approaching regularity 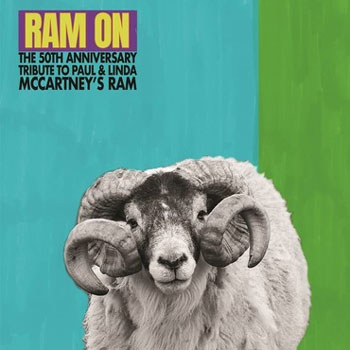 (and sincere thanks if you do), the name Fernando Perdomo will be a familiar one. An in-demand multifarious session player, he also finds the time to release what seems like an album per month. His latest project (or latest of which I am aware as of this writing) is a tribute/re-creation of Paul and Linda McCartney’s landmark Ram LP.

For Ram On, Fernando enlists the help of some very esteemed colleagues. His co-producer is Denny Seiwell, the drummer who played on the original LP and went on to become a member of Wings. Underappreciated L.A. popsters Bebopalula are on hand as well, along with Pat Sansone (Wilco, The Autumn Defense, Mellotron Variations, Emma Swift etc.), Durga McBroom (touring lineup of Gilmour-led era Pink Floyd), Eric Dover (Jellyfish, The Lickerish Quartet), husband-and-wife Ron Bonfiglio and Carnie Wilson…you get the idea.

The full roster of singers and musicians passes the 100 mark (with a few dozen among ‘em being Facebook friends of mine), but the core band for much (but not all) of Ram On includes Perdomo, Seiwell, Dave Spinozza (who also played on the McCartneys’ record), Davey Johnstone of the Elton John Band, Will Lee and others.

But what does it sound like, you well may be asking. For the most part, the arrangements stick closely to what you’ve heard on the original Ram. When Dan Rothschild sings the chorus of “Too Many People,” he sounds uncannily like Paul himself. The Dirty Diamond showcases the country blues character of “3 Legs,” giving it a more well-rounded arrangement than Paul’s original. The title track features ukulele just like the 1971 record, and Pat Sansone also does a credible McCartney vocal impression.

Over the years, many have pointed out how much the late Emitt Rhodes conjured the style and spirit of Paul, and Ram On’s Adrian Bourgeois-led reading of “Dear Boy” suggests how Rhodes might have done it. On one of my visits to Los Angeles, I was fortunate enough to wander with some dear friends into a gig by one of Emeen Zarookian’s bands. Here he leads Bebopalula, for a note-for-note, sound-effect-for-sound-effect remake of “Uncle Albert / Admiral Halsey.”

“Smile Away” is a rocker, albeit a somewhat slight one. The version on Ram On is competent enough, but – and I’m slightly surprised to be noting this – Linda McCartney’s vocals are sorely missed. Johnstone’s slide guitar work is a treat, though. “Heart of the Country” is one of those deep album cut McCartney gems that’s too often overlooked. Like every track on this collection, the recording featuring Dan Rothchild is extremely reverent to the original, but if that brings the song to the attention of new listeners, its existence is more than justified.

“Monkberry Moon Delight” is very different, but the same sentiment apply. Timmy Sean belts out the lead vocal. The arrangement on this one is among the most impressive among the entire set. Dead Rock West cover “Eat at Home” with positive results; their reading may lead listeners to wonder why the tune wasn’t a hit in 1971. “Long Haired Lady” is among the weaker tracks on Ram (though that doesn’t make it bad). Save for its arrangement, it sounds more of a piece with the material on Wings’ Wild Life. Bonfiglio and Wilson play it straight, digging into the song’s marital bliss vibe. Because Ram On sets out to recreate Ram, it includes a brief reprise of the title track.” It’s fine, but as redundant as it was on the original.

Paul has rarely if ever included the scintillating “The Back Seat of My Car” in his live set. And that’s understandable: both musically and from a vocal standpoint, it’s ambitious and difficult to execute. In fact it may be the Great Lost McCartney Tune, the one even serious admirers might not know. And the ensemble on Ram On nails the music and arrangement. But Brentley Gore seems to be struggling a bit with the lead vocal. Not a train wreck by any means, it does pale in comparison to the rest of the set as a result.

Not to come off as an older guy (though with each passing moment I climb closer toward that description) but Ram On doesn’t just follow the track sequence of the 1971 LP. No, it clearly uses the CD reissue as its primary reference. That means that the two songs appended to the 1993 reissue are included as well. The first, “Another Day” is a McCartney classic, and the cover featuring Gordon Michaels and a long list of backing singers is a near carbon copy of the single.

The “Another Day” 45 was backed by “Oh Woman Oh Why,” a minor (but not minor-key) blues number that was representative of what early Wings sounded like onstage. It featured a howling McCartney vocal. Perhaps to give themselves a break, two singers – Eric Dover and Lauren Leigh – take turns recreating that vocal cord-shredding performance, and Jimmy Powers V turns in some stellar slide work.

“The Back Seat of My Car’ was a perfect album closer for Ram. “Oh Woman Oh Why,” less so. Perhaps in acknowledgment of that fact, the Ram On ensemble adds a brief instrumental track, “Too Many People (Slight Return)” to wrap up the collection. It’s quite reminiscent of the post-false-ending section of “Strawberry Fields Forever.” A nice touch, that.

No doubt all of the participants had loads of fun making Ram On. Does it add much of significance to the body of the world’s recorded works? Perhaps not. But for listeners, it should provide fun to rival the experience of having been there.