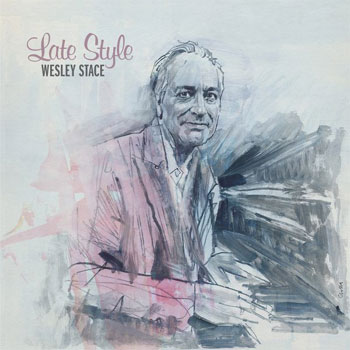 For most of his professional career Wesley Stace has worked using the stage name/sobriquet John Wesley Harding. The singer-songwriter’s love (and command) of wordplay is second to none; leave it to him to have titled a collection of odds and sods Dynablob (an anagram of the stage name of another composer, the one who released an album using Stace’s stage name as a title, sort of). He’s also a raconteur par excellence, as I witnessed firsthand nearly a decade ago when he served as master of ceremonies for Yep Roc’s 15th anniversary concerts.

These days, he’s less likely to use the JWH name, having decided for reasons of his own to revert to his given name. His wit and musical skills remain intact, but for his latest release he has steered his career in a slightly different direction. Stace’s primary instrument is acoustic guitar, but on Late Style, he’s taken a new approach. The songs were written on piano.

As many a serious student of music can attest, there’s a difference. Speaking for myself, when I hear certain albums, I can often identify which songs were composed on a keyboard rather than a guitar. The two instruments have a different musical vocabulary, if you will. Certain chord progressions just seem to make more sense when executed on piano instead of guitar. It’s not simply a question of how difficult or challenging the chords and melodic progression are; it’s more a case of certain sequences of notes or chords flowing more on one instrument than the other.

As it happens, Stace’s warm vocals lend themselves to piano accompaniment. And not to diminish even a bit his body of work prior to this release – I’m on record as being a fan – but the new approach showcases his command of music’s stylistic landscape in a way that guitar-based music couldn’t always do. You’ll hear jazz, classic country and other influences in Late Style’s dozen tracks.

And because of Stace’s inimitable approach to music – part storyteller, part troubadour, part keen and wry observer of the human condition, part consummate musician and entertainer – it all hangs together coherently. His lyrics and delivery conjure the spirits of George Gershwin and Noel Coward, though he sounds not at all like either of those.

If Late Style is reminiscent of any other contemporary artist, it’s perhaps Bill Pritchard. But comparisons are largely futile, because Wes sounds truly like no one but himself. He’s a superb crooner on tunes like the opening “Where the Bands Are.”

Prairie Prince is a drummer who’s capable of most anything. An early member of Journey (no, really) he’s perhaps best known as the longtime drummer for The Tubes, and for his extensive work (in the studio and on tours) with Todd Rundgren. And fans of any of those acts may recall Rundgren’s With a Twist and Half Twisted tours; on which Prince played bossa nova style, standing up. If you dug his work then, you’ll love it here; Stace seems even more natural in the context than Todd did.

Nora O’Connor’s subtle and beautifully executed backing vocals on cuts like “Everything All the Time” may remind some listeners of Prefab Sprout (or Pritchard, again). Stace himself focuses on vocals only, leaving the instrumentation to Prince and a select assemblage of other musicians. Late Style features piano, yes, but there’s also plenty of buttery Rhodes electric piano, vibes, saxophones, trumpets and the like, all presented in a manner that as tasteful as it is delightful. “Hey! Director” follows on from classics like “There’s a Starbucks (Where the Starbucks Used to Be),” musically channeling Herb Alpert’s Tijuana Brass.

“Come Back Yesterday” conjures warm memories of the Left Banke. Stace easily brings forth wit, but he’s not mean-spirited about it; there’s an underlying sense of compassion and simpatico that shines through his lyrics. With Late Style, he reveals that he’s a crooner for the ages. It’s unclear if this latest release represents a one-off (like Rundgren’s With a Twist LP) or an introduction to a new direction. The former would be a shame, it’s clear that Stace’s mastery of this approach yields superb results, and more in a similar vein will be most welcome. In the meantime, Late Style is a strong contender for Musoscribe’s Best of 2021.