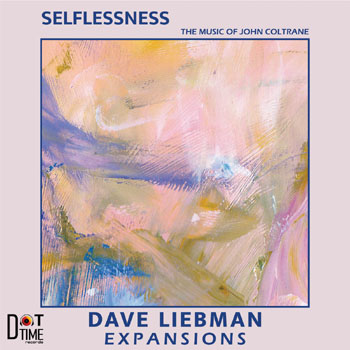 Selflessness isn’t saxophonist Dave Liebman’s first tribute to John Coltrane, but as Lewis Porter’s liner notes explain, it’s the first of those in which he works with his current band rather than a one-off assemblage. And the result of this approach is a natural, unforced session in which there’s a kind of preternatural, unspoken communication among the players. Joining Liebman are keyboardist Bobby Avery, upright bassist Tony Marino and sax/flute man Matt Vashlishan.

Taking a very modern approach – or at least using modern tools to make a classic-sounding recording – four of the tracks feature electronic instruments. Avey plays synthesizers on “Compassion, “”Dear Lord” and the title track. And Vashlishan plays a win controller on “Compassion.” But traditionally-minded listeners aren’t likely to be distracted by the high technology; it’s employed in a manner in keeping with the material. Fusion this is not. “Compassion” in particular its a hypnotic, atmospheric track. (The CD version, not reviewed here, does feature additional tracks like “Ole” which are somewhat more synth-centric.)

“My Favorite Things” is here, of course, and its this group at its most lively. There’s a lightness about these performances that suggests that the material – challenging and slightly abstract as it can sometimes be – felt like the most natural thing in the world to play and record. And listening feels that way, too.