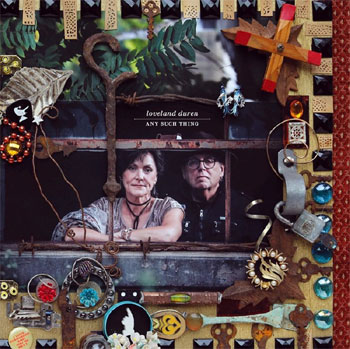 If you know the name Van Duren, it’s likely that you’re familiar with him as part of the musician/songwriter axis of Memphis, Tennessee, a scene that also gave us Big Star (and the careers of Alex Chilton, Chris Bell and Jody Stephens), The Scruffs, Prix and a handful of others. Like those artists, Duren’s work is (a) superb and (b) rarely given the exposure and commercial success it deserves.

Van Duren’s solo career features a number of excellent, must-have releases; those are now more widely available than was once the case, thanks in recent years to the folks at Grammy-winning Omnivore Recordings. Readers of these pages are strongly encouraged to pick those up if they have not already done so. (And they should tell their friends, too.)

Duren led a band called Good Question for many years; toward the later period of that project he was joined by vocalist Vicki Loveland. The two first appeared on recordings together with their debut release, 2013’s Bloody Cupid. For that album they were billed as LovelanDuren; they’ve since decoupled the surnames, but their fruitful musical collaborations continue apace. I interviewed them around the time of Bloody Cupid’s release. I didn’t get around to covering their next album (released in 2016 and titled Next, as it happens), but it, too is well worth picking up.

With the activities surrounding the reissue of Duren’s first two solo records, Loveland and Duren were a bit too busy to get another album made. They were also immersed in the promotion for the documentary made about Duren, Waiting: The Van Duren Story.

I hear it’s a great film, in the mold of Searching for Sugar Man and Big Star: Nothing Can Hurt Me, but unfortunately I’ll have to go on faith: though it was released in late 2018 and received excellent notices, some three years later it has yet to receive either screening beyond festivals or a DVD release. For all the championing of Duren’s inimitable appeal as a composer, singer and musician, and fans’ frustration regarding his lack of wider success – y’know, the premise of the film – its lack of availability seems an especially cruel fate. I hope – but do not know – that there’s a good reason for all this, and that the situation will be remedied.

But I digress, as I sometimes do. To return to my main point – and the reason for this entry – suffice to say that 2021 brings the release of the long-awaited third Loveland Duren album, Any Such Thing.

As stellar as the first two albums were, listening to them I had a sense that Duren in particular was aiming to carve out a sound a bit different from his earlier solo material. Seeing as he’s working with a partner, that made perfect sense. But now, nearly a decade into the Loveland Duren story, their sound has hit the even-sweeter spot: it follows on from the ear candy of Duren’s solo work while showcasing Loveland’s musical personality on an equal level.

The approach of the opening track, “Tumbledown Hearts” sets the tone. Duren sings a bit on his own, then Loveland takes a few vocal lines. Then their voices entwine, displaying the kind of simpatico that can only come from untold hours of singing together. It’s lovely stuff.

“A Place of No Place” rocks harder, with some tasty slide guitar propelling things forward while Loveland belts it out. And the horn section (credited as the BTM Horns) helps underscore the pleasing and soulful Bluff City character of the album. No extra points if you figure out the identity of the song’s subject. Best not even to speak his name.

The torchy gospel textures of “Within Crying Distance” are a treat. Riffing on a memorable line from Ernest Hemingway’s The Sun Also Rises, “Ain’t It Pretty to Think So” is characterized by a dual lead vocal and a somewhat ‘80s-flavored saxophone. It feels like classic Duren, but with his talents applied toward an atypical arrangement.

Duren’s moody Wurlitzer electric piano underpins “Skywriting (Tasmania),” one of the most introspective tracks on Any Such Thing. It’s a Loveland vocal showcase. Liam Grundy’s acoustic piano solo is superb. The finely-wrought string ensemble work on “Funny Way of Showing It” – another Loveland vocal turn – is a thing of beauty.

Duren returns to the vocal mic for the melancholy “Where Are We Going?” The song’s lyrics strike a perfect balance between optimism and clear-eyed realism, just the kind of thing you’d expect (and hope for) from the veteran songwriter and his longtime musical partner.

“Bridges I Had to Burn” feels like pop-country (the really good kind). Duren and Loveland’s vocal mix works wonderfully well here. In a perfect world, this would be the spotlight track for c&w radio play. Though it takes awhile to get going – it begins with some atmospheric sounds that run nearly 30 seconds – “Everyone is Out of Tune” eventually reveals itself as the kind of tune that follows on in the proud tradition of Are You Serious? and Idiot Optimism.

The delicate, waltzing “Ending Again” closes the album with a lump-in-the-throat lyric and a melody to match it. Its wistful lyric portrays a couple seemingly packing it in but holding out (against hope) that they might have better luck their next time. Here’s hoping that Vicki Loveland and Van Duren will continue their musical association and grace listeners with more delightful, heartfelt music.