Home  »  electronica • instrumental • interview • new release   »   Starfarer: To the Synthwave ‘Multiverse’ and Beyond

Starfarer: To the Synthwave ‘Multiverse’ and Beyond 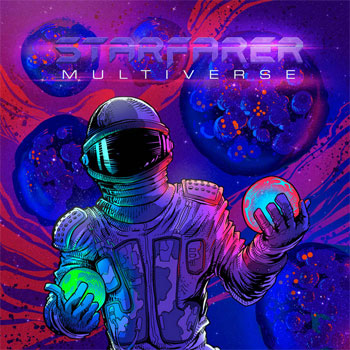 Though he was already well-established as a metal guitarist, when Miguel Iniguez launched Starfarer in 2017, he was a total newcomer to the world of electronic music. Memories of 1980s horror and sci-fi soundtracks fired his imagination, inspiring him to take his new project in a radically different direction.

“I was heavily inspired by John Carpenter,” he says, citing the soundtracks for The Thing (1982) and They Live (1988) as major influences.

And so Starfarer became his first outlet for original synth-based music. This Wednesday, the project opens for Transformers: The Movie soundtrack tribute band the Cybertronic Spree. It’s a fitting show for a project he says was always intended “to make spacey music inspired by ‘80’s soundtracks and video games.” 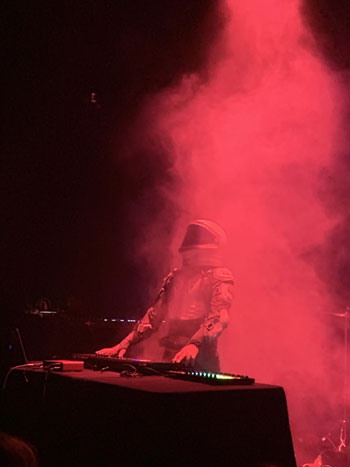 While he enjoyed the interactivity of his previous band Miseria, Iniguez says working alone has afforded him greater latitude to explore his own ideas. Even when he was still playing metal, he’d begun learning his way around the technological side of music: software, digital audio workstations and drum programming.

“All that was really helpful when I switched over to electronic music,” he says. Because he works primarily with plug-ins and virtual synthesizers (rather than traditional or vintage standalone keyboards), the transition was nearly seamless.

After debuting the project with the moody retro piece “Star Traveller,” Iniguez set a goal for himself: one album per year. He quickly established a more ambitious pace. Today, the Starfarer catalog includes three albums of original material plus an EP. Along the way, he’s also released assorted non-album singles, including an inspired reading of Kraftwerk’s “Metropolis.” The fourth Starfarer album, The Dark, comes out October 22.

March of this year also saw the release of Multiverse, a collection in which 18 other artists remixed Starfarer tracks. “Most of them I know personally,” Iniguez says. The rest are artists with whom he’s interacted on social media. While pleased with all of the tracks, Iniguez gives special praise to Portland cyberfunk artist DreamReaper’s remix of “Strange Land,” a track that first appeared on 2019’s Into the Unknown. “It sounds totally different from the original,” he says.

In an era increasingly dominated by the singles format, Iniguez remains a believer in the album, but he also fully embraces the digital age. “To the Stars,” the opening track and an album highlight from his third record Voyagers, got particular notice online. “It took off on Spotify and got over 300,000 streams,” he says. The sweeping, cinematic nature of Starfarer tracks hasn’t gone unnoticed by artists working in the visual medium either. DSkoopa, a content provider on the Twitch livestreaming platform recently licensed “To the Stars” for use on his stream. 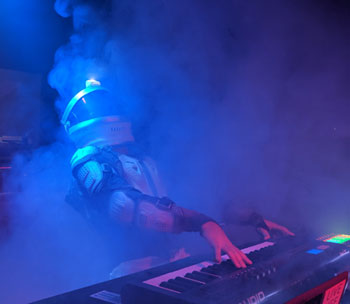 Despite being a relative newcomer, Iniguez is on track to become a leader in the local synthwave community. In 2019, he launched Synth Valley Productions to promote the scene in San Jose and the Bay Area. And when the pandemic put a stop to live performances, he began to organize streaming shows for Starfarer and other synthwave artists.

Yet back when he first developed the concept for Starfarer, live performance wasn’t part of the plan. “I was thinking,” he recalls with a laugh, “do people really want to watch somebody just mess around with the keyboard on stage?” But after attending a synthwave concert by FM 84 and The Midnight at Turbo Drive/DNA Lounge, he found himself inspired. “I really missed playing live,” he says. “So I decided to plan it out, to take my electronic music and do performances with it. So—to add more to the entertainment aspect—I came up with the outfit.”

Live, Starfarer is the total package: attired in a spacesuit with a helmet, Iniguez plays real-time keyboard leads and solos over the backing tracks he programmed in his home studio. The visual spectacle of the interstellar astronaut rocking the keys makes for a memorable audience experience, and draws a variety of reactions—some familiar even to those of us here on Earth. “A lot of people headbang or dance,” Iniguez says. “It’s always a good time.” When asked what it’s like to perform inside a space suit, he laughs. “Towards the end,” he admits, “I’m really sweaty.”