If I had a bucket list, a conversation with Bob Mould would have certainly been on it. And I realized that goal recently when I interviewed Mould (formerly of Sugar and Hüsker Dü but rightly appreciated today as a solo artist with a superb, deep and varied body of work under his own name) for a feature that ran in what – sadly – looks to be the final issue of SF Weekly.

But even that feature – which Mould kindly shared on social media, giving it some of the widest readership my work has has in recent days – only focused on part of our phone conversation. The rest was too good not to share, so what follows is an edited transcript of key parts of the remainder of our talk. – bk 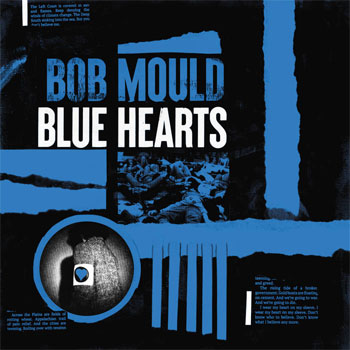 Bob Mould: Are you in San Francisco?

Bill Kopp: I am not! I’m in Asheville, North Carolina, but I write for SF Weekly and other outlets.

I love Asheville. Every time I come through for work, it’s always a joy. You know, the Grey Eagle is such a great venue, there’s the galleries and the restaurants.

From my perspective, two of the most remarkable items in your body of work are the “campfire mixes” of “Believe What You’re Saying” and “If I Can’t Change Your Mind,” originally on Sugar’s Besides. For me, those mixes point out, for anybody who didn’t know at the time, the kind of melodic strength of your songwriting. They reinforce the idea that a great song can withstand radically different arrangements. That said, I’m interested to know if, when you’re writing songs, do you approach them like, ‘Okay, this one is primarily acoustic, that one is sort of a high-powered punk song,’ or do the songs sort of reveal their character to you as you are working on them?

That’s a really great question. For most of the material on Blue Hearts, some of it translates to acoustic, some of it would not. I would like to think that most of my material can convey with acoustic guitar and voice. I love doing solo shows both electric and acoustic. The songs that I play in that format are the ones that do convey that just the song is the power. With Blue Hearts, the power was the sort of mixes and the heat. So, “Fireball” or “Racing to the End,’ I don’t know if those would stand up as well on acoustic guitar. But “Next Generation” and a lot of the stuff in the middle of the record would stand up great.

It’s funny…I don’t know if this is still true what I’m about to say. But when I talk to songwriters or publishing company people, they say, ‘Wow, if you only had a Campfire mix of this song, we could take this to Nashville, and we could probably get a country hit out of this.’ That used to be the motif for presenting material to Nashville: you do not put your character into it, just one instrument and one voice, because then you theoretically leave it open for interpretation by the eventual recording artist.

How important is it to you that listeners can sort of apply or identify with your lyrics and apply them to their own life or way of thinking?

If I look at it from the fan perspective, and I listen to other people’s work that touches me emotionally, I look at it like it’s a postcard or photograph in time that I love, that I would want to look at every day. Over time, when I look at other people’s work, I don’t see them speaking directly to me. I see them being sort of a memory of something I was experiencing. And I think that’s the beauty of music: we attach to music, and it always takes us to the place where we heard it.

In terms of specifically speaking to people with lyrics, I’m usually hesitant to describe the setting and the players in a song, you know, like who is the character I’m singing about. I always fear that will depersonalize it for people. I would love for them to feel what I felt when I was making the song, but I think I like the idea of those songs being sort of almost like memorabilia from the listener’s life, you know, like, ‘Oh my god! I went to this thing and I bought this thing!’ So, maybe songs can be like that for people. [For example, someone once told me,] ‘I heard “See a Little Light” when my wife was giving birth to our first child.’

If you listen back to a song that you wrote, say, 10 years ago or maybe even in the Sugar days or even back to Hüsker Dü, do you recognize the guy who wrote those songs?

I normally would not look back. I would just keep playing the recent iteration of that person, that person’s idea in song form. Having said that, with the Distortions box set, for instance, going back through 30 years in chronological form and reimagining covers to tell a geographical narrative, I had to backtrack yet again and take a look as much as I did with the autobiography.

So, do I recognize that person? Yeah. Do I approve of that person’s behavior through all that time? Not necessarily. I’d like to think I’m a better person now in many ways than I was then, but this is what we do, right? It’s on display, and that’s who I am. I do learn a little bit more about myself each time I do sit down and say, ‘Okay, you’ve got to look back for a moment here.’