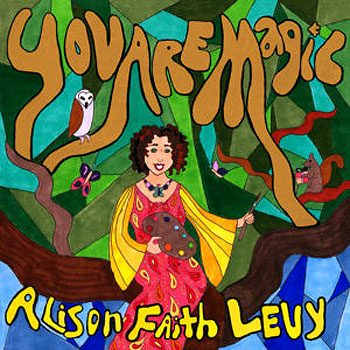 Disclaimer: My children are in their late 20s and early 30s, so I am by no means the primary target demographic for this release. But I know good music when I hear it, and consider it my responsibility to share it.

For a long time, much of the music aimed at kids was cloying, treacly and frankly insulting to their intelligence. For the most part, those days are behind us. The artists working in that genre respect their audience, and apply the kind of care and effort that the music and its listeners deserve. At its best, music made for kids can be enjoyed by their parents and caregivers as well. That’s certainly the case with the music of Alison Faith Levy. Levy has an impressive pedigree as a creator of music that grownups enjoy.

I’m not the first (and I don’t expect I’ll be the last) to note that Levy will inevitably remind adult listeners of Carole King. Like King, she is possessed of an inerrant sense of melody, and a gift for creating music that feels new and familiar at once. That’s a handy set of skills for a songwriter who crafts tunes designed to be heard by the younger set. After a tantalizingly brief instrumental track (“Roots & Branches”), You Are Magic effectively kicks off with the hypnotic (both musically and lyricially) “Turn Around.” The title track is a bouncy, playful number full of positivity and wholly lacking in artifice.

And like any good sunshine pop artist – because ultimately, that’s the best way to describe Levy, a kindred spirit with friends The Corner Laughers (and their deeper, darker pals The Orange Peels) – she knows how to work a wordless “ba ba ba” chorus into a song. Lots of sprightly piano of the Harry Nilsson kind finds its way into Levy’s arrangements; “Putting it Back Together” has a lovely piano solo that (to this listener) seems a bit long for a kid-focused tune, but as a grownup, I truly dig it. And I trust Levy to know what works for her chosen audience.

“Draw” has lyrics that will resonate with the younger set, but there’s nothing here that will give adults the willies nor embarrass them if they’re caught listening. Levy is skilled an applying the aural equivalents of shade and light to her songs, and producer Allen Clapp (The Orange Peels) understands how best to frame her music for maximum effect. The pedal steel textures on “Canopy” are a delight.

Levy’s “The Gift” is an original tune, not a cover of the grisly Velvet Underground number (but then you will have rightly assumed that to be the case). Layers of vocal harmonies make the tune sparkle, and the galloping drum work is spot-on. “Now is the Moment” is Levy at her most Carole King-ish; it’s the least for-kid-sounding track on You Are Magic, yet it’s not the least bit out of place on the record. The comparatively brief set ends as it began, with a short instrumental, “Leaves & Sky.” Speaking of leaves, You Are Magic leaves the listener ready for more from this outstanding artist.