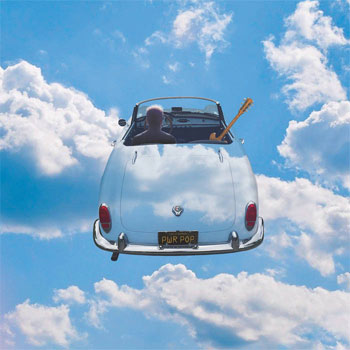 Richie Mayer is a clearly a student of classic pop. His breezy melodies are irresistible. They sound jut familiar enough to invite comparisons to The Beatles and like-minded artists, but he has enough originality to make sure his music steers clear of the slavish imitation that’s often a hallmark of artists who swim in the classic pop pool.

There’s a proud tradition of one-man-bands, and you know the giants of that approach: McCartney, Rundgren etc. The do-it-all-yourself method is far more common today than it once was, bu even grading on that curve, Mayer’s work on The Inn of Temporary Happiness is noteworthy.

He rocks Sgt. Pepper style on “You Don’t Get Me High Anymore,” applying soaring vocal harmonies and a catchy set of riffs to the task, with bits of instrumental texture that elevate the tune beyond the basic guitar/bass/drums configuration. And when he uses electronic drums, it’s done in an intelligent fashion.

Sure, “Love will Find a Way” splits difference between “Fixing a Hole” and any random Jellyfish tune, but that’s a delightful place to be. “How Can I Leave When I’m Already Gone” veers a bit close to novelty territory, but in the context of this album, it serves to highlight his versatility.

Apparently “Sometimes I Feel Like I’m One Kiss Away” dates from the ‘80s, and was recorded with a band. Its approach is quite reminiscent of Wings, or perhaps Off the Ground-period McCartney. A tasty guitar break makes the tune even more special.

“Warmth of the Sun” isn’t a Beach Boys cover, but its arrangement is in line with the Pet Sounds era Brian Wilson, right down to the wonderfully subtle vibraphone and ambitious vocal phrasing that decorates the track.

Speaking of Pet Sounds, Mayer includes a track that – consciously or otherwise – references it: “Come Back Caroline” absorbs Brian Wilson influences, processes them through Mayer’s own sensibility and delivers something wholly original.

“Don’t Say Nothing” is unabashed late ‘70s style power pop a la Shoes. Except for Mayer’s vocals, the musical style and arrangement on “This is Your Day” could pass for a lost Badfinger tune; the music sounds uncannily like that band, with George Harrison lending his trademark slide guitar to the track. Cellos and acoustic guitar picking are among the highlights of a delightful (if too brief) instrumental, “Kat’s Guitar.”

“Sunshine Blues” is propulsive pop reminiscent of The Cars. And perhaps to underscore the point that Mayer can work credibly in a wide variety of styles, “Hall of Blame” is an exercise in classic countrypolitan pop. “She is Why” returns to the bouncy sunshine pop of Beatles a la “Your Mother Should Know.” A catchy lead guitar break is followed by some strawberry-flavored Mellotron flutes and some Turtle-ish vocalese.

The hits keep coming. If – like me – you’re a newcomer to Mayer’s work, you might think that The Inn of Temporary Happiness is a best- of set rather than his latest offering; it’s simply that consistently great. “Is Everybody Ready” compares favorably to a better-known yet similar track: Michael Bublé’s unexpectedly pop-wonderful “Just Haven’t Met You Yet.”

The title tracks is all mandolins, ukes and chamber instruments, all in service of a delightful waltzing number. And then it’s back to soaring power pop for “She Taking it Too Well,” with shades of Rubber Soul crossed with a bit of XTC, Colin Moulding version. After serving up sixteen tunes of pop pleasure, Mayer ends with a tune called “Don’t Say Goodbye.” Filtering instruments though a Leslie and adding a sweeping orchestra that recalls “A Day in the Life,” it’s another winner. Perhaps more than any other track on the album, it rewards close, repeated listening to reveal the myriad careful details that went into its making.

To labor a couple of sports metaphors, Richie Mayer swings for the fences on The Inn of Temporary Happiness, and he hits it outta the park. An ambitious record that still feels warm, friendly and – most of all – real and sincere, it’s a strong contender for my Best Album of the Year.