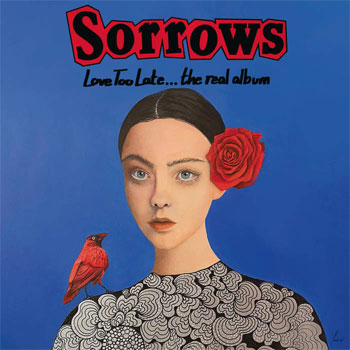 Here’s a record with a helluva story. After making an excellent melodic rock album in 1980’s Teeenage Heartbreak, Sorrows (no “the”) went to England to record their second LP with expat producer Shel Talmy producing. Apparently no one involved was happy with the results, and the resulting release, Love Too Late, sank without a trace. There, it seemed, ended a tale.

Fast forward four decades. Sorrows have returned with a new album, Love Too Late…the real album. While press info regarding the exactly-when details is scarce, this new album is clearly a re-recording of the original album, done the way the band wanted it.

I’m on record as being a great admirer of Shel Talmy; his production work for The Who, The Creation and many other bands is spot-on. But after doing a bit of A/B comparison between the original album and these new recordings, it’s quite clear why the band was less than thrilled (to put it mildly) with his work. 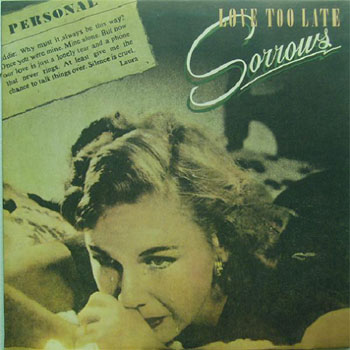 The Shel Talmy-produced “original.” You don’t need it.

Here’s the thing: the original sounds perfectly fine considered on its own. The songs are strong, snappy, punchy, and very much in the vein of late-late-’70s energetic rock that often gets tagged as new wave or power pop (or high-energy pub rock). Put another way, if you mixed those songs into a playlist with Nick Lowe and Graham Parker and early dB’s, it would fit nicely.

But then you hear the new versions – played by the band’s 1981 lineup – and you begin to understand. There’s an immediacy, an urgency. The songs, they’re the same. The arrangements are nearly identical. But the session vocalists and players who added a sheen of facelessness are gone, as are some of the production choices that made the album sound a bit slicker than, say, music coming out of the Stiff Records camp.

We live in a time when classic albums get recast by excellent, thoughtful producers like Steven Wilson. The results sometimes surpass the originals, bringing out qualities list in the mix. In the case of Sorrows, they went back to the drawing board (i.e. the recording studio) but in doing so they resisted any temptation to “update” their sound. They’ve truly made the record they wanted to make 40 years ago, and it sounds like it. There’s every reason to acquire this new version, and absolutely no reason to hang on the the old one. Sorry, Shel. And congratulations to Sorrows; here’s hoping a batch of new tunes is soon to follow.