For Destroy Boys, The Personal is Political

Co-led by guitarist Violet Mayugba and singer Alexia Roditis, Sacramento punk band Destroy Boys debuted with the 2015 studio EP Sorry Mom. The band’s profile got an early boost when they were favorably mentioned in a 2016 Rolling Stone feature on Green Day. And by 2018 — around the time of the release of their second LP, Make Room — the group had cultivated a loyal and growing base of followers. That support led to their pick as a fan-selected act to play the 2018 Noise Pop Festival. 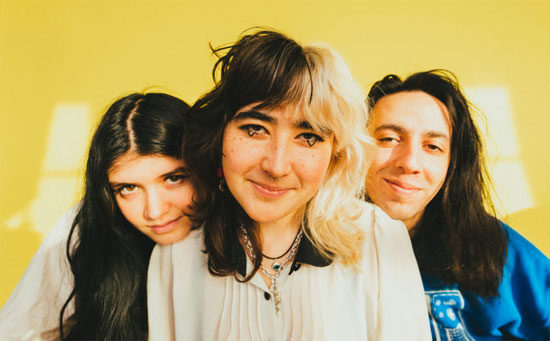 While the pandemic sidelined Destroy Boys from live performance, it doesn’t seem to have blunted the group’s forward momentum. Now based in San Francisco, the band released two singles in 2020: “Fences” and “Honey I’m Home,” and this year they’ve signed with Hopeless Records, cranking out three new singles. The first was a minute-long adrenaline blast called “Muzzle,” which earned nearly a million plays on Spotify alone. Released on August 4, “Locker Room Bully” was accompanied by a new video and the news of a forthcoming full-length.

“Locker Room Bully” is timely and topical, exploring the consequences of misinformation spread via social media. But Roditis rages rather than ruminates on the subject, and the band — Roditis, Mayugba and drummer Narsai Malik — provides instrumental muscle to match.

The most fascinating of this year’s trio of Destroy Boys singles is “Drink.” Released in June, the song displays impressive lyrical depth. On a casual listen, it sounds like a love song wrapped in a pop-punk arrangement. Closer inspection reveals that “Drink” is describing something closer to a love-hate relationship, and the subject of affection and revulsion is alcohol. It’s a candid, nuanced look at addiction. And right from the start, Roditis delivers a line full of self-awareness: “I’m about to turn this confession to a smoke cloud,” they sing.

“I love some nuance,” laughs Roditis, the group’s primary lyricist who co-writes with Mayugba. “Things are always more complex than one opinion or another.” Roditis says that they made a point of working multiple perspectives into the song. And while the tune explicitly mentions alcohol, booze is meant as a wider metaphor for anything that’s the focus of addiction. “Whatever you’re addicted to can be like a little sanctuary,” Roditis says. “But then you also feel like garbage for it.”

Destroy Boys put thought into their lyrics. “I really like to have an arc of some sort, so that there’s a change,” Roditis says. “The two perspectives — ‘She loves me / she loathes me’ and ‘something isn’t right / she holds me tight’ — that inner conflict is really important.” Roditis says that in the case of “Drink,” a nuanced approach was the truthful one. And it’s one that — in Destroy Boys’ experience, at least — isn’t often found in popular music. “I hadn’t heard a song that showed that, aside from Interpol’s ‘Read My Chemistry,’” Roditis says.

Destroy Boys’ music is the result of a collaborative creative process, though, and how a song eventually turns out might not closely resemble the form in which it began. “The original intention of the song was different,” says Mayugba. The song was more literal: “Drink understands me.” Changing that third “person” to a “she” not only made the metaphor less heavy-handed, it subtly introduced the idea of same-sex love. Even though that’s not what “Drink” is about either, the multilayered lyric ends up working on a number of levels.

The fact that it’s all contained in a dramatic, catchy melody doesn’t hurt a bit. Listeners who trill along to the “She really loves me” chorus may miss the song’s point entirely. And that’s OK: In Destroy Boys’ world, there’s room for messages and melodies. “Our band is a very lucky example of being able to do both simultaneously,” says Mayugba. “Everything that we write about is super important to us. And music is the way I communicate who I am; without it, I wouldn’t be able to function very well.”

Destroy Boys haven’t released any music that’s overtly political. But at the same time Roditis subscribes to the personal-is-political philosophy. “What we’re trying to get to is life: interpreting being queer and being mad at the patriarchy and trauma,” they say. “That can all be seen as political. And I don’t really know what to do about that.”

But Alexia Roditis does in fact know what to do about that. “I hadn’t written an explicitly political song until recently,” they say. That song isn’t out yet. “But it’s a banger,” Roditis teases with a smile. “Writing about our own experiences can be seen as controversial by some people, but I think [music and politics] go hand in hand. Music is a vessel to communicate my thoughts on society.”

The upcoming Open Mouth, Open Heart promises to build on the catchy music and thoughtful lyrics of the albums, EPs and singles that preceded it. Due October 8, the band’s third LP will be its first for Hopeless Records. Destroy Boys approached the prospect of a label change with caution. “I was really worried about a label trying to make us do something that we don’t want to do,” Roditis explains. “But it was clear that [Hopeless] wanted to give us a lot of creative control. And they haven’t tried to infringe upon our vision; they trust us as artists to know what we’re doing.”

Destroy Boys’ lineup has changed over the years, with rhythm sections coming and going, but Roditis and Mayugba seem to have found the right mix with drummer Narisi… and without a full-time bassist.

“I’ve had a lot of fun playing bass parts in the studio,” says Mayugba. And the idea of rotating bass players suits the band. “We get to play with all of our friends and bring them out on the road whenever we can,” Mayugba says.

With the kind of candor that characterizes Destroy Boys’ music, Roditis cuts straight to the heart of that subject: “Working with three people is easier than working with four!”